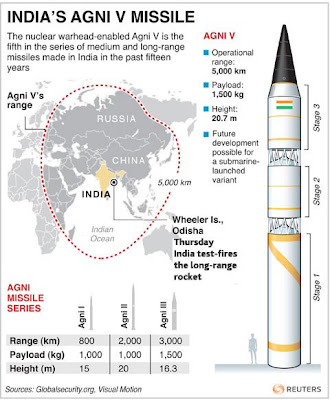 Agni-V, the 5000-km range surface-to-surface Inter-Continental Ballistic Missile (ICBM) capable of carrying multiple nuclear warheads, has catapulted India into an extremely select club of countries possessing such a deadly weapons platform. Agni-V gives India the much-needed muscle and a strong deterrence against its nuclear-armed adversaries as the missile can not only target every city of China, but is also capable of reaching Australia, Eastern Europe, North Eastern and Eastern Africa.
Coupled with the induction of the first operational nuclear attack submarine the Akula II class Nerpa rechristened INS Chakra into the Indian Navy on April 4, Agni-V gives India the power to deliver the knock out punch to the enemy in the event of hostilities breaking out. Only five other countries - China, Russia, France, the United States and the United Kingdom - have such long distance missiles.
Agni-V and INS Chakra are the biggest and the most deadly symbol of India’s military might and while Army Chief General VK Singh's letter to Prime Minister Manmohan Singh on the war preparedness, lack and obsolescence of vital weapons systems and ammunition made a lot of news in the last few weeks, what went unnoticed is that the defence forces have been slowly adding muscle to counter the threat of a two-front war. In the past few months the government and the defence forces have taken several steps to plug in the gaps in India’s defence, particularly in relation with China.

Along with the earlier missiles of the Agni series - Agni-I (range: 700 km), Agni-II (2,000 km), Agni-III and IV (3,000 plus km) range - the ICBM gives India a wide array of potent weapons platform to take on the enemy. The 17 m long, 2 m wide and 50 tonne Agni-V is a generation ahead of the other surface-to-surface missiles in India's inventory and what makes the missile extremely effective and deadly is that it can carry Multiple Independently Targetable Re-entry Vehicles (MITRV) capable of delivering multiple warheads at different targets at long distances.
Such missiles when fired in large numbers can penetrate a ballistic missile shield and devastate the intended target or targets. After the missile is inducted into the strategic forces by 2014-2015, India will acquire a strong deterrent capacity against China as the entire country would come under its range.
Although Agni-V will need to undergo several more trials before it can be formally inducted into India's arsenal, the test-firing has sent out a strong statement to the world, particularly to the country’s adversaries.
The induction of INS Chakra, the impending sea trials of the indigenous nuclear submarine INS Arihant that will be armed with torpedoes and the 700-km range nuclear K-15 submarine-launched ballistic missiles, the shortlisting of the Rafale for Indian Air Force’s (IAF) 126 Medium Multi-Role Combat Aircraft (MMRCA), induction of two squadrons of the front-line Sukhoi-30 MKI fighter jets in the North East at the Tezpur and the Chabua air bases are just some of the moves the government and defence forces have taken to counter the Chinese threat.
India will have an assured second strike capability once Agni-V and INS Arihant become operational as the country has already a declared policy of no first use of nuclear weapons. INS Arihant will complete the crucial third leg of nuclear triad as a nuclear-powered submarine can stay underwater for a very long duration, remain undetected and file a submarine launched nuclear missile.
The Indian Navy is gearing up to operate five nuclear submarines by the end of this decade, including two leased from Russia and three Arihant Class underwater warships built indigenously.
With six Scorpene submarines being constructed at Mazagon Dockyards in Mumbai in collaboration with French DCNS and six more planned to be built under the Project-75 India, the Navy is also getting ready for the induction of the 44,500-tonne INS Vikramaditya or the refitted Admiral Gorshkov from Russia in early-2013. INS Vikramaditya will have MiG-29Ks, the first-ever naval supersonic fighters, on board giving the carrier battle group a lethal edge. The Navy will operate 45 MiG-29K fighters out of which 16 will be based on INS Vikramaditya.
India is also getting ready to induct the 40,000-tonne indigenous aircraft carrier (IAC), being constructed at Cochin Shipyard. The carrier is slated to be battle-ready by 2015 and will give a big boost to the Navy's plans of operating three carrier battle groups with one on in the Arabian Sea and the other in the Bay of Bengal and the third in reserve. Both the INS Vikramaditya and the IAC will also carry India's indigenously designed naval version of the Tejas Light Combat Aircraft.
According to Navy Chief Admiral Nirmal Verma the second indigenous aircraft carrier called IAC-II will be a much bigger warship than the IAC, displacing 50,000 tons. If the Cochin Shipyard adheres to the schedule then the Navy will operate three operational carrier battle groups by 2020.
The fifth-generation Sukhoi T-50/ PAK FA, which is being developed in collaboration with Russia, will also give India a potent fighter in the sky. The fighter jet is undergoing tests and is expected to enter into service with the IAF by 2017. The IAF is planning to induct 250 Sukhoi T-50/ PAK FA.
Even the Army, in the news for having an arsenal of obsolete weapons, is moving fast to match up to the Chinese threat on the Eastern front. China has been modernising and building the infrastructure and is now capable of outnumbering the Indian forces by almost 3:1 by moving almost 30 divisions with over 15,000 soldiers each to the disputed 4,057km long Line of Actual Control.
The Army is already raising a new mountain strike corps comprising of almost 70,000 soldiers along with two mountain infantry divisions with 1,260 officers and 35,011 soldiers to be based in the North East. Equipped with M-777 ultra-light howitzers, 145 of which are being procured from the US, the mountain strike corps will give the Army the boots on the grounds.
With the new regiment of BrahMos supersonic cruise missile (the Block-III version that can scale mountainous terrain and then dive steeply) already deployed in the North East, the Army has plugged a major hole in India's defence.
Taken together these measures reveal that India is indeed taking the threat from both the Eastern and the Western fronts seriously and taking measures to counter it. All the three wings of the military – the Army, Navy and IAF – are not only adding the latest weapons platforms in their arsenal, but also upgrading their existing arsenal to thwart any misadventure by the nuclear armed adversaries.
Posted by kuldeep singh chauhan at 22:19 No comments: