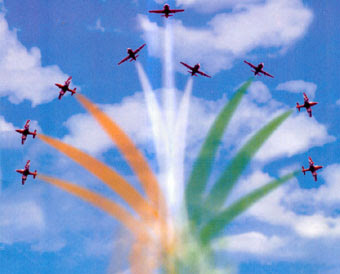 The air base at Kalaikunda will now play an extremely crucial role in the country's defences.

Aircraft based here will be involved in air defence over the strategic Andaman and Nicobar Islands and the Bay of Bengal. The tri-services command at the A&N Islands will be in charge of the squadrons of Su-30 MKIs and other advanced aircraft based at Kalaikunda for this specific purpose. This decision was taken when plans for basing Sukhois in the Andamans got scuttled after the 2004 tsunami in which the IAF lost assets. "Till now, Kalaikunda - while performing several other duties - has been a bridge with the Andamans. The role of the base will grow and aircraft based here will play a vital role in patrolling the skies over the Andamans and the Bay of Bengal. Kalaikunda will play several roles that include air defence, training and building better co-operation in the region for a possible Nato-like alliance with India playing the pivotal role," an official said.

The Kalaikunda airbase is nestled among forests of Sal in the Maoist badlands of West Midnapore. Set up by the Americans for its Superfortress bombers operating during the Burma campaign, the facility has grown steadily in importance over the years. "A large area falls within the responsibility of this base. There are several bases in the northeast but along the eastern coast, the closest one is in Chennai. It is our job to handle the defences along the coast and the Bay of Bengal region. We play host to several foreign air forces interested in joint exercises with the IAF," the official added.

"This is a very compact base built in classical American style. The Americans used to operate flights from Kalaikunda, Dudhkundi and Salua. Today, we have a radar station at Salua and Dudhkundi has been converted into an air-to-ground firing range. Over the years, Kalaikunda has developed into a major location for international air exercises. Soon, we shall have the Republic of Singapore Air Force visiting Kalaikunda. The base is close to Bay of Bengal where air-to-air firing can take place," says Air Commodore R Radhish, AOC, Air Force Station, Kalaikunda.

But Kalaikunda goes well beyond an exercise hub. Apart from the MiG-27 ground attack aircraft and MiG-21 Fn fighters of the OCU, squadrons of Su-30 MKIs and other advanced varieties from the IAF's fleet call on Kalaikunda on a regular basis. A squadron of Su-30 MKIs is now at the base.

Over the last few years, Delhi has started to realize that China is as great a threat as Pakistan and there has been a rush to upgrade facilities in the eastern and northeastern sector. Fighters from Kalaikunda can fly to the Andamans and beyond for longrange patrols. Unlike older aircraft, the Su-30 MKIs can fly at very slow speeds (nearly that of a helicopter) and carry out surveillance before zooming away at twice the speed of sound.

"In case of some mischief by our northern neighbour, this is the place where our defences can fall back to. Also this base is playing a crucial role in developing regional cooperation. There may come a time when a Nato-like organization develops here with India playing the role of the US. If this happens, our assets would no longer have to be on their toes for 365 days a year. Pilots of the Nato countries have to be on active duty for only 90 days at a stretch," an IAF official said.

The IAF chief, Air Chief Marshal Norman Anil Kumar Browne, said that the aircraft had performed well in the recent earthquake relief operations in north-eastern India and that the IAF would utilize the multi-role capability of the aircraft as required.

The C-130J can land and take off from unpaved, grassy fields the size of a football ground and can be a big support in both peace and war to drop or pick up equipment, soldiers and those hit by calamities.

The IAF had signed a deal for six C-130J aircraft for about $1.1 billion with the US military systems giant Lockheed Martin on January 31, 2008, and five of these aircraft have been delivered within 2011 as contacted, before their scheduled delivery time.

India had in 2008 signed a deal with Russia to induct 80 Mi-17 V5 helicopters for strengthening its chopper fleet for humanitarian and disaster relief missions and transport operations. "We are going to induct the first batch of Mi-17 V5s from Russia by the second week of the month, and by March next year we will have 26 of them," an IAF official said.

They said one of the first few helicopters would be sent to the northeast sector and will be deployed at the Bagdogra air base under the 156 helicopter unit.

The compliment of all 80 helicopters is likely to be inducted by late 2013 or early 2014, IAF sources said. The IAF is also looking to induct another 59 such choppers to replace the older Mi-17 variants and the Mi-8 choppers.

The IAF has plans of procuring over 230 helicopters.
Posted by kuldeep singh chauhan at 23:41