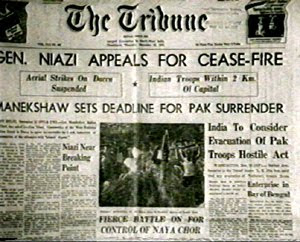 The Abbottabad Osama incident where a foreign power has been able to ingress deep into a military cantonment area has thrown up many questions of the competence of our various military and civilian intelligence agencies. Conspiracy theories abound

Some years ago I wrote, “In the early formative years Pakistan needed the military for defending its borders but now the military needs the country for its own existence.” I have surprised myself with this prophetic analysis because the military is proving my contention as an irrefutable reality. The other day I heard Air Marshal (retd) Asghar Khan’s talk at the Institute of Strategic Studies Islamabad (ISSI). He proved without doubt that India never attacked Pakistan, as we have been given to believe; instead it was Pakistan that always initiated all four wars. According to him the Maharaja had not acceded to India till after Khan Abdul Qayyum Khan sent the tribal lashkars into Kashmir to force him to accede to Pakistan in 1948. The Maharaja had made representation to the Liaquat Ali government under the Indian states protocol but was not entertained due to the preoccupation and deteriorating health of Jinnah. In the environs of Srinagar the lashkars began a spree of rape, looting and returning to their respective areas with truckloads of loot. The Maharaja escaped to Jammu and signed the accession papers with India. That was the time the Indian army was flown into Kashmir.

In 1965 Ayub Khan first tested our military capability in the Rann of Kutch, a short limited skirmish over the Sir Creek unmarked border even today. According to Asghar Khan, he retired from the Air Force in August 1965 and was appointed Chairman PIA. On reading in the newspaper that our tanks had entered the Chamb-Jaurian area of Jammu he immediately went to Ayub and asked him if Pakistan was going to war over Kashmir and did he realise that the Indians would react and attack in Punjab? Ayub replied that the foreign ministry (Zulfikar Bhutto) had assured him that the Indians would not. On September 3, Asghar Khan visited the Ops room at Air Headquarters and found officers running this way and that and knew that the war was about to start across the Punjab border. I personally remember that the Indian advance recon jeeps turned back from the Engineering University, Lahore, thinking that the lack of resistance was a trap on the morning of September 6. Little did they realise that the Pakistan Army was not even deployed as a defensive measure but sleeping in their barracks! The only resistance they faced was from a Rangers company deployed along the BRB canal, which held up the Indian attack till the army woke up and came to its rescue.

The 1971 war was also instigated by Pakistan when the military establishment in power at the time did not hand over power to the Awami League of Sheikh Mujib, while attacking the people of East Pakistan on their agitation against this injustice. It is alleged that three million people were killed, thousands of women raped and even babies brutally murdered. The Indian army was invited by the Awami League to save them from the genocide being perpetrated by the Pakistan Army. Instead of learning some basic political and strategic lessons from the infamous defeat and surrender of 90,000 Pakistani troops, the Pakistani military strategists seem to have only hardened their India enemy mindset. In the Kargil episode after suffering another defeat, bodies of the Light Infantry Regiment based in Gilgit were not acknowledged as Pakistani COAS (Musharraf) claimed that these were Kashmiri guerrilla fighters and not Pakistani soldiers. More soldiers sacrificed at the altar of the top brass’s political ambitions.

The 1948, 58, 62-68, 73-77 and the ongoing wars, extrajudicial murders in Balochistan can only be described as colonial repression by military conquest. Comparisons continue to be made between the East Pakistan (Bangladesh) conflict and the 63-year-old conflict in Balochistan. The genocide in East Pakistan was a concentrated campaign as it was against high concentrations of population centres and geographically confined, while in Balochistan the population is small and scattered over a vast barren, mountainous and desert area, thereby dictating different tactics to achieve the same ends, a gradual genocide of the Baloch.

One always thought that the military academies who receive recruits with basic intermediate qualifications impart graduate education, a BA degree on graduation, meaning all the BA subjects, military history, political, social sciences, economics, languages, geography and other relevant subjects for professional soldiers. The recently appointed commandant at the Kakul Academy has changed the syllabus in a very interesting manner. He has in his wisdom stopped the teaching of political and social sciences and introduced Management Sciences for BBA and MBA to develop the future military officers into professional managers. Good idea, as the rapidly expanding military industrial and commercial empire will need managers and what better than to have them from their own ranks instead of hiring civilians.

The Abbottabad Osama incident where a foreign power has been able to ingress deep into a military cantonment area has thrown up many questions of the competence of our various military and civilian intelligence agencies. Conspiracy theories abound. The most plausible and somewhat verified from sources and residents close to the incident area seems to confirm the collusion theory. It is reported that an incident took place in Haripur some five to six years ago where ostensibly an Egyptian family of three women, a number of children and one or two men were involved in an altercation with police officials including shots being fired. An FIR was registered against them under section 302, etc, but within a few days was changed to some minor offences. The case was quickly decided with some financial penalties. The family was then moved to Abbottabad.

Neighbouring residents report that the Kakul Academy office lights were on till very late that night. When the choppers arrived and shooting started, many of them climbed their roofs and observed everything. The Pakistan Army arrived within three to five minutes and started pushing people into their homes. The choppers dropped the hit squads and flew to the Baloch Regiment grounds, waiting there to be called. It was in the attempt to pick up the squads that one of them malfunctioned and crashed. As soon as a relief chopper arrived to pick up the squad, which had remained behind to demolish the crashed chopper, and left, the Pakistan Army contingent moved in and secured the compound.

In the light of the tragic death of Saleem Shahzad for revealing infiltration of terrorists into the ranks of naval and military institutions, the story of Abbottabad makes more sense. The US was confident that Osama was there and put pressure on GHQ to cooperate or else face the consequences. GHQ, fearing a backlash from the TTP and al Qaeda, decided to collude but made it clear that they would deny knowledge. Again they miscalculated as the backlash came in the shape of the Mehran base, FC cadets and other attacks. Myths and reality do not mix.

The writer is Director Programmes Sungi Development Foundation. He can be reached at asad.rahman@sungi.org