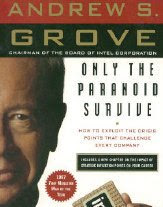 The early 1980s was when the Japanese memory producers appeared on the scene in overwhelming force, recounts Andrew Grove in Only the Paranoid Survive.
“People who came back from visits to Japan told scary stories. At one big Japanese company, for instance, it was said that memory development activities occupied a whole huge building. Each floor housed designers working on a different memory generation…” reads a graphic account.
“On one floor were the 16K people (where ‘K’ stands for 1,024 bits), on the floor above were the 64K people, and on the floor above that people were working on 256K-bit memories. There were even rumours that in secret projects people were working on a million-bit memory…”
Business success contains the seeds of its own destruction, sombrely observes the former Intel chairman in his preface to the book. “The more successful you are, the more people want a chunk of your business and then another chunk and then another until there is nothing left.” He believes, therefore, that the prime responsibility of a manager is to guard constantly against other people’s attacks and to inculcate this guardian attitude to the staff.
Watch for ‘strategic inflection points,’ advises Grove. Such points, which are times when in the life of a business its fundamentals are about to change, are opportunities to rise to new heights, but they can just as likely ‘signal the beginning of the end.’
These points, caused by technology or otherwise, can be deadly when unattended to, says Grove. “They build force so insidiously that you may have a hard time even putting a finger on what has changed, yet you know that something has…” Companies that begin a decline as a result of these changes ‘rarely recover their previous greatness.’
Resuming the Japan story, Grove remembers how Intel had to fight hard. “Riding the memory wave, the Japanese producers were taking over the world semiconductor market in front of our eyes… Their principal weapon was the availability of high-quality product priced astonishingly low.”
More depressing was a secret document that Intel could lay its hands on. It was a memo sent to the sales force of a large Japanese company. Grove recites the key portion of the memo: “Win with the 10 per cent rule… Find AMD (another American company) and Intel sockets…Quote 10 per cent below their price… If they requote, go 10 per cent again… Don’t quit till you win!”
The downward pricing spiral pushed Intel to try niches and earn a premium. “We tried to invent special-purpose memories called value-added designs, we introduced more advanced technologies and built memories with them,” writes Grove of those days. “There was a saying at Intel at that time: ‘If we do well we may get 2X (twice) the price of Japanese memories, but what good does it do if X gets smaller and smaller.’”
Meanwhile, Intel continued to spend heavily on R&D because, as a technology company, it believed that ‘every problem should have a technological solution.’
A saga of survival.
-Recommended reading
Posted by kuldeep singh chauhan at 11:10