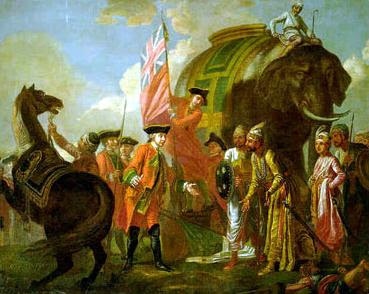 The Battle of Plassey, 23 June 1757, was a decisive British East India Company victory over the Nawab of Bengal and his French allies, establishing Company rule in South Asia which expanded over much of the Indies for the next hundred years. The battle took place at Palashi, Bengal, on the river banks of the Bhagirathi River, about 150 km north of Calcutta, near Murshidabad, then capital of undivided Bengal. The belligerents were Siraj-ud-daulah, the last independent Nawab of Bengal, and the British East India Company.

The battle was preceded by the attack and plunder of Calcutta by Siraj-ud-daulah and the Black Hole tragedy. The British sent reinforcements under Colonel Robert Clive and Admiral Charles Watson from Madras to Bengal and recaptured Calcutta. Clive then seized the initiative to capture the French fort of Chandernagar. Tensions and suspicions between Siraj-ud-daulah and the British culminated in the Battle of Plassey. The battle was waged during the Seven Years' War (1756–1763) and in a mirror of their European rivalry, the French East India Company sent a small contingent to fight against the British. Siraj-ud-Daulah had a numerically superior force and made his stand at Plassey. The British, worried about being outnumbered, formed a conspiracy with Siraj-ud-Daulah's demoted army chief Mir Jafar, along with others such as Yar Lutuf Khan, Jagat Seths (Mahtab Chand and Swarup Chand), Omichund and Rai Durlabh. Mir Jafar, Rai Durlabh and Yar Lutuf Khan thus assembled their troops near the battlefield but made no move to actually join the battle. Siraj-ud-Daulah's army was defeated by roughly 3,000 soldiers of Col. Robert Clive, owing to the inactivity and treachery of the conspirators.

This is judged to be one of the pivotal battles in the control of South Asia by the colonial powers. The British now wielded enormous influence over the Nawab and consequently acquired large amounts of concession for previous losses and revenue from trade. The British further used this revenue to increase their military might and push the other European colonial powers such as the Dutch and the French out of South Asia, thus expanding the British Empire in Asia.

Alivardi Khan ascended to the throne of the Nawab of Bengal after his army attacked and captured the capital of Bengal, Murshidabad. Alivardi’s attitude to the Europeans in Bengal is said to be strict. During his wars with the Marathas, he allowed the strengthening of fortifications by the Europeans and the construction of the Maratha Ditch in Calcutta by the British. On the other hand, he collected large amounts of money from them for the upkeep of his war. He was well-informed of the situation in southern India, where the British and the French had started a proxy war using the local princes and rulers. Alivardi did not wish such a situation to transpire in his province and thus exercised caution in his dealings with the Europeans. However, there was continual friction; the British always complained that they were prevented from the full enjoyment of the farman of 1717 issued by Farrukhsiyar. The British, however, protected subjects of the Nawab, gave passes to native traders to trade custom-free and levied large duties on goods coming to their districts – actions which were detrimental to the Nawab’s revenue.

Mir Muhammed Jafar Ali Khan is also known by Indians as Gaddar-e-Abrar (which translates in English as 'The Traitor of Faith'). He succeeded Siraj-Ud-Daulah as the eighth Nawab of Bengal, and the first of the Najafi dynasty after deceiving Nawab Siraj-Ud-Daulah and surrendering his army in battle field against Robert Clive. His rule is widely considered the start of British rule in India and was a key step in eventual British domination of the country. His greed of becoming Nawab of Bengal, led him to make a secret pact with Robert Clive and surrender & slaughter of Army of Bengal in Battle of Plassey, without fighting, which led to foundation of British rule in India. For this act of treachery, he has been infamously called Gaddar-e-Abrar. Gaddar means a traitor & Abrar means faith in Urdu. He is sometimes known in some places around India as the "Faith Traitor".

Mir Jafar came to Bengal as a penniless barbarian. He was a son of Arab immigrants from the region known as Najaf in modern day Iraq. He took up a job in Nawab's army and slowly promoted himself to higher class sweeper. Although he had good reputation in the history books but in fact, he was traitor who deceived his own country men for the sake of money and empire of Bengal. Because of him English army took over the well build Muslim Empire in Masoor which was a welfare state.

Mir Jafar's initial military career was not without glory. His opportunity came when he rescued Ali Vardi Khan's nephew, the hapless Sauqat Jung, from the clutches of Mirza Baqir at Cuttack. He parlayed this success into a prominent role in Ali Vardi Khan's many military campaigns, specially against the grandson of the earlier nawab Murshid Quli Khan, and the Marathas. Nawab Ali Vardi Khan then gave him the hand of his half-sister (Shah Khanam) and seven thousand horses to command.

However, Mir Jafar had higher ambitions. Arrogant in his position he took advantage of an Ali Vardi Khan weakened by a decade of fighting with Marathas to enter into a conspiracy with Ataullah (the faujdar of Rajmahal) to overthrow and murder the Nawab. However, the conspiracy was unearthed and he was stripped of most of his powers. He returned to Murshidabad, where he regained the trust of the Nawab's grandson, Siraj-Ud-Daulah, and slowly returned to power and prominence.

Soon after Ali Vardi Khan's natural death, Siraj Ud Daulah became the Nawab of Bengal at Murshidabad. On ascending the throne, he made the controversial decision of elevating a Kayastha named Mohanlal as his supreme Diwan. This elevation of a Hindu to such a prominent position caused the established nobility, and in particular Mir Jafar, great offense. He was then the bakshi or head of the armed forces, second only to the Nawab, and the elevation of Mohanlal to a post above him was taken almost as a personal insult. He became determined to overthrow Siraj-Ud-Daulah and gain the Nawabi for himself.

His opportunity came when Siraj-Ud-Daulah was distracted in his campaign against the British. This was the time when the British contacted him (along with others in the Nawab's court) and offered him the throne if he betrayed Siraj-Ud-Daulah. However, Siraj-Ud-Daulah returned victorious from Kolkata and discovered the conspiracy; he demoted Mir Jafar and appointed Mir Madan, who was loyal to the Nawab, the new bakshi. Ghulam Husain says "Sirāju-d-daulah placing large batteries in front of Mīr Jafar’s palace was ready to blow him up, and ordered him to quit the City." There is some question here as to why Mir Jafar was not more severely reprimanded, but its probable that Siraj-Ud-Daulah was wary of going too far given Mir Jafar's influence in his court at that time.

Mir Jafar was left smarting under this new insult while Siraj-Ud-Daulah was busy with his campaign against the British.Influenced nobles and other officials who joined hands were Mir bakshi,Manickchand and khadim khan On 1 May 1757, the British Calcutta Council made a secret treaty with Mir Jafar, promising to place him on the throne of Bengal. William Watts, the chief of the British factory at Cossimbazar conducted the conspiracy with remarkable diplomatic skill and secrecy. On 5 June 1757, he personally visited Mir Jafar and obtained his oath of allegiance.

Siraj-Ud-Daulah then attempted to win back the support of Mir Jafar, and apparently thought he had successfully obtained the backing of the considerable military force still under Jafar's command (though no longer Bakshi, Mir Jafar retained a substantial number of foot soldiers and cavalry). Mir Jafar, it is recorded, was not particularly impressed by the promises of Siraj-Ud-Daulah but with some duplicity agreed to support him while continuing to encourage the British in their advances. Siraj-Ud-Daulah finally met the British forces at Plassey for the definitive stand. On the day of the Battle of Plassey, Siraj-Ud-Daulah had the advantage of overwhelming force, but at the critical time Mir Jafar's men stood watching passively rather than engage the enemy. This wiped out much of the numerical superiority that Siraj-Ud-Daulah enjoyed, and the soldiers of Siraj-Ud-Daula were decimated by the smaller but much better armed and trained British forces. Siraj-Ud-Daulah fled but was eventually captured and executed.

After Siraj Ud Daulah’s defeat and subsequent execution, Mir Jafar achieved his long-pursued dream of gaining the throne, and was propped up by the British as puppet Nawab.Mir Jafar paid a sum of Rs.17,700,000 as compensation for the attack on Calcutta to the company and the traders of the city. In addition, he paid large sums as gifts or bribes to the officials of the company. Clive, for example received over two million rupees, Watts over one million. Soon, however, he realised that British expectations were boundless and tried to wriggle out from under them; this time with the help of the Dutch. However, the British defeated the Dutch at the Battle of Chinsurah in November 1759 and retaliated by forcing him to abdicate in favor of his son-in-law Mir Qasim. However, Mir Qasim proved to be both able and independent, willing to live with but not bow to the British. The Company soon went to war with him, and he was eventually overthrown. Mir Jafar managed to regain the good graces of the British; he was again appointed Nawab in 1763 and held the position until his death in 1765.

Mir Jafar probably was the last ruler of Bengal. After him the British ruled Bengal for next 200 years. Mir Jafar is widely reviled by the people of Bangladesh, India and Pakistan. The word "mirjafar" in Bengali and the phrase "meer jafar" in Urdu, are used much as quisling is used in English. Nevertheless, after 200 years, when the British left the region, and upon the formation of Pakistan, Mir Jafar's direct descendent Iskandar Mirza, was appointed as the first president of Pakistan
Posted by kuldeep singh chauhan at 23:52