Dawood Emerges As a Global Terrorist 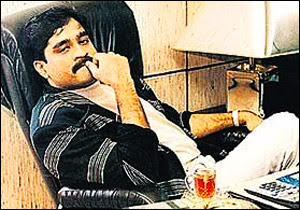 Dawood Ibrahim has evolved from a Mumbai bomber to a full-blown global terrorist. Intelligence agencies in New Delhi believe in the complete radicalization of the D-company boss , as he finds ways to further his terror network, aided by the ISI, and emerge truly as a global threat.

Dawood's relations with ISI date back to 1993 when he executed the blasts in Mumbai but until a few years ago he was viewed as a logistics man for ISI by Indian agencies. LeT, the other arm of ISI, played the role of the main aggressor. The first Mumbai attack appeared to be one-off terrorist crime by a man focused on his smuggling and extortion operations.

'' In the past he was looked upon mainly as a mercenary. LeT was more ideology driven but Dawood and his gang now seem to have merged into LeT,'' said an official, adding that Dawood now presents as much a danger to India as to the US or any other target country of the jihadis.

The transformation has happened because of his dependence on ISI for his own security as well as his desire for respectability as a jehadi as a protection mechanism. Initially ISI is said to have used him for pumping fake currency into India but as his links with LeT grew, he helped LeT find new recruits in India, mainly in Gujarat and Maharashtra.

His well-documented links with LeT have taken on a menacing proportion because of the growing collaboration between LeT and al-Qaida . LeT, so far focused on J&K and India , has grown in ambition and reach, with evidence piling of its attempts to attack targets in the West.

It was his growing link with al-Qaida which led finally , in 2003, to the US Treasury Department declaring him a Specially Designated Global Terrorist (SDGP). As late as January 2010, a US Congressional report warned that Dawood and his gang posed a direct threat to US interests in South Asia.

Post-Osama bin Laden's killing, al-Qaida's dependence on LeT may increase, leading Dawood to use his vast network stretching from South Asia to Middle East to Africa for terror activities. '' That is something the Americans need to factor in,'' said an intel officer.

While calling him a global terrorist, the US said in a press release that Dawood's smuggling routes from South Asia, the Middle East and Africa are shared with bin Laden and his terrorist network.

'' Successful routes established over recent years by (Dawood) Ibrahim's syndicate have been subsequently utilised by bin Laden. A financial arrangement was brokered to facilitate the latter's usage of these routes. In the late 1990s, Ibrahim travelled in Afghanistan under the protection of the Taliban,'' it said.

Dawood's international infamy grew further in 2010 when it was reported by Germany's 'Der Spiegel' magazine that he had helped efforts to smuggle a group of terrorists linked to al-Qaida into Europe for Mumbai-sytle attacks in Germany. The report said al-Qaida and associated groups were planning to attack Germany's Parliament, Reichstag.

An intelligence source recalls a report from a UN official a few years ago sent to Indian agencies saying that it was Dawood who helped al-Qaida make a huge amount of money through diamond trade. Dawood as a key player in narcotitcs smuggling can also be an asset for the terrorist groups like Taliban who have used the proceeds of opium cultivation to finance their operations.

It is well known that after the US froze al-Qaida related bank accounts in 1999, the terror group bought up diamonds in Africa and used them to launder terror funds. The UN official informed Indian agencies that many of these diamonds were sent to Dawood who got them polished before sending them back to al-Qaida operatives. Experts don't deny that some of the money generated through this trade could have been used to finance 9/11.

Dawood's gang was caught taking arms to Mombasa at the behest of ISI. In India, apart from LeT, Dawood is also said to have financed terror group SIMI. In 2008, it was revealed by government agencies that Dawood had been routing funds to SIMI through an aeronautical engineer, CAM Basheer, from Kerala.

While Dawood is not a named accused in 26/11, the fact that the explosives used during the Mumbai attacks were similar to that of 1993 blasts did not go unnoticed among investigating agencies. Some of the SIM cards seized from the perpetrators were also said to have been traced to the posh Karachi locality where he is said to have lived for many years.

Dawood has shown unflinching loyalty for Pakistan since he escaped to that country in 1993. So much so that many believe he helped finance Pakistan's nuclear programme by working closely with scientist A Q Khan. It is believed by Indian agencies that he helped Pakistan in the procurement of military nuclear material abroad and its passage to Pakistan. He is also said to have set up a factory in Malaysia for manufacturing centrifuges needed for uranium enrichment.

The US needs to seriously rethink its approach to the war on terror given the growing evidence of links between Dawood and global terror outfits. The US attitude in practice has been to focus on groups like the al-Qaida while going soft on those more focused on India. This is a seriously flawed position. The fight against terror must encompass all terror groups. Notions like '' my terrorist'' and '' your terrorist'' are misplaced. Terror is today globalized. And there is enough evidence to show deep links between criminals like Dawood and terror groups like al-Qaida . The US must also give up the belief that it alone has a right to strike against terrorists on foreign soil and stop counselling India against such an option. India may choose for good reasons not to exercise that option, but the US has no right to suggest that it should not have the option.
Posted by kuldeep singh chauhan at 00:03