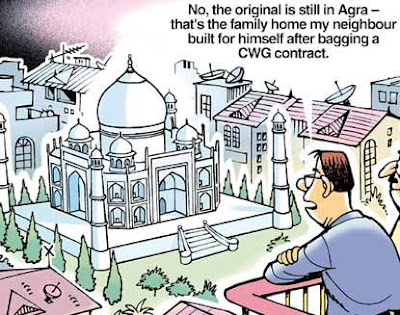 I was not surprised when at the Regional Passport office I had to grease the palm of a tout to expedite issue of a new pamphlet. When asked, the tout tersely asked: Sir, are you from the Mars? This is India. The Mother of corruption rules the country. The riddle was complicated. To my pleasant surprise he rattled out that Janpath to Rajpath, Ballimaran to Bhindi bazaar everyone is required to be pleased with graft money. How can you get the black money back from abroad? The Mother of corruption has stashed away billions herself.

It was a great moment of education. I retreated as a wiser person.

“I am pained to observe that the law in this country punishes very harshly the small offenders involved in offences of stealing of small amounts to the tune of few hundred or few thousands. ”Such accused are often sent to jail by the big fishes who defraud the exchequer of crores of rupees…they are dealt with by investigating agencies in a different manner and the law does not act with the same harshness to these offenders,” Justice Dhingra observed in a recent order. ”This attitude of the investigating agencies is beyond comprehension,” he said while directing the CBI to register a case against Pankaj Aggarwal, the alleged mastermind in the scam. Aggarwal has his business in Dubai.

Illegal Telephone Exchanges Scam – 1000 crores
Non-Banking Financial Companies (NBFC) Scam – swindled 12,000 crores of small investors before leaving the state
Karnataka State Government to award a meager cash prize (Rs. 2,000) to Jayant Tinaikar, who reportedly exposed the fake stamp paper scam 12 years ago.
Uranium Corporation of India Limited Scam – 20 crores
Oriental Bank Scam – 596.44 crores
Mandankumar Scam – 3.5 crores
Pune Hassan Ali Khan Scam – 50 crores – I-T department, ED, and IB estimates that several thousand crore rupees were routed out of India(possibly Swiss banks) through havala and banking channels. The rea; estimate of Hassan Ali’s scams are yet to be gauged. He was protected by Cong/NCP stalwarts.
Congress MP Moni Kumar Subba from Tezpur, lied about his Indian nationality for 16 years manages to scam the country off by 25000 crores
There is little chance of recovery in most of these cases as there are not many assets to recover the arrears, officials claimed.
Air Ticket Booking Scam – 13 crores
The Royapettah Benefit Fund (RBF) in Chennai went bust drowning Rs 450 crore and leaving investors and depositors in the lurch a company allowed to operate by RBI.
Fertilizers Subsidies Scam – 300 crores
Arunachal Pradesh’s corrupt governance: 1000 crores .Misappropriation under former CM Gegong Apang and present incumbent Dorjee Khandu) Aug 10 – Apang arrested
There were a number of cases regarding mismanagement in the Public Distribution System. People in the villages were not getting enough food allotted by the Centre. Cooperative rural banking scams affected small depositors like laborers and teachers. The hydro power sector was also in doldrums.
Sampoorn Gramin Rojgar Yogana Scam – 457 crores . Dec 07 – Scam referred to CBI.
A muti-crore scam under which the poor were deprived of food grains under the state scheme. A systematic loot was taking place in the state and the government was not willing to give permission for holding a CBI probe into the scam running into crores of rupees.
Warehouse Receipts Scandal – 500 crores
Stock Holding Corporation of India Limited (SHCIL) Scam – 2580 crores.
Hyderabad Metropolitan Water Supply and Sewerage Board (HMWS&SB) Scam – 50 crores
Punjab Public Service Commission (PPSC) recruitment scam – 8 crores
Three judges of the High Court were found taking favors from Ravi Sidhu, former PPSC chairman. On April 19, 2004, 25 sitting judges of the High Court had gone on mass leave protesting Chief Justice B K Roy’s move to seek an explanation from two judges, Justice Vinay Mittal and Varinder Singh, who had allegedly applied for membership of a private golf course, Forest Hill Resort Club. The club was involved in litigation and was later demolished on the orders of the High Court. The club was illegally constructed in complete violation of Forest and Environment laws. Honorary memberships were given to IAS officers and the two judges to legitimize the illegalities.
Delhi Development Authority canteen owner Ashok Malhotra owned more than 50 cars and 10 motorcycles were recovered, all bearing special VIP number plates. Raid unearthed 5000 land documents, and other assets worth 7000 crores
Former Supreme Court Chief Justice YK Sabharwal was involved in dubious judicial deal-making that earned his sons huge profits. – estimated 58 crores
Kerala State Cooperative Bank Scam – 2000 crores
Aircraft Import Scam – 1059 crores
Leave Travel Concession (LTC) Scam – loss of Rs 200 crore to Government and PSUs.
Indian Space Research Organisation (ISRO) Land Scam – 900 crores
‘ISRO comes directly under the prime minister and it is they who have to launch an inquiry and not us. If they are ready for it, then the state government will provide all necessary help,’ – Kerala Chief Minister V.S. Achuthanandan
Filing of petition challenging the actions of the banks in waiving of around Rs 2,300 crore of public money arbitrarily without any valid reason, describing this as the largest single waiver in the history of Indian banking industry.
Fake- housing projects in north India – 500 crores – Y S Rana from Delhi. Rana was the owner of PS&G Developers and Engineers Ltd arrested by EOW.
Kidney Transplant Racket – 150 crores more than a 1000 victims.
Many innocent laborers lost their kidney in lure of money and job. The racket is believed to be spread in various states, including Jammu and Kashmir, Rajasthan, Haryana, Delhi and Maharashtra.
Coal India Ltd illegally diverted at least Rs10 crore from the funds it had collected for over a decade and meant for the Prime Minister’s National Relief Fund (PMNRF).
Part of the funds collected at the time of the Kargil war for the NDF has been transmitted as late as 27 August 2007, after the initiation of this inquiry.” The Kargil war happened in 1999.
Funds collected for victims of the Kargil war, Orissa cyclone and Gujarat earthquake were misused by top IAS officers in Punjab – the documents prove that officers posted as deputy commissioners in Ludhiana, Patiala and Sangrur misappropriated and misused crores of money while heading the Red Cross societies in their districts.
Lucknow Development Authority (LDA) Land Scam – 6 crores

Punjab Vigilance Branch arrests whistle-blower
Punjab vigilance bureau is penny wise and pound foolish. A sub-divisional officer (SDO) who blew the whistle on a scam worth crores was arrested by the bureau in an alleged graft case. While the SDO has been suspended, his own report on the utilization of border area funds — exposing what is probably the tip of the iceberg — is gathering dust.
Kolkata Museum Scam – 18 crores
One of the biggest repositories of the country’s cultural and historical heritage has been siphoning off crores of rupees under the pretext of preserving priceless artifacts, a probe has found.
Senior Punjab IAS officer suspended for going out of his way to help a company by hiring it without inviting tenders and extending advances without proper bank guarantees. The company failed to repay, causing loss of Rs 20 crore to the corporation.
KPMG – India is “fraud haven”
BCCI Dalmiya Scam – 60 crores
Illegal export of sandalwood – 5 crores
Madhya Pradesh Health Minister Ajay Vishnoi quits after Income Tax raid on brother’s premises – 500 crore
Ghaziabad Provident Fund scam – 23 crores – involved 83 accused included 36 judges, including one sitting Supreme Court judge, 11 High Court judges and 24 judges of subordinate judiciary. Beneficiaries of the ill-gotten money which was siphoned off fraudulently on the basis of fake documents and fictitious government servants and withdrawal of crores of rupees from the provident fund account of third and fourth-grade employees in Ghaziabad region between 2001 and 2008.(Read more 1) Chief Justice of India KG Balakrishnan denied heading the bench hearing (Read more 1) Dec 08 – CBI says it would seek permission to interrogate the judges. Oct – 09 – Key accused dies of heart attack while in custody Jul 10 No evidence against 17 out 41 judges and 24 remaining judges

These are few landmark scams.
Posted by kuldeep singh chauhan at 04:26