Homeland - The US Pakistan saga 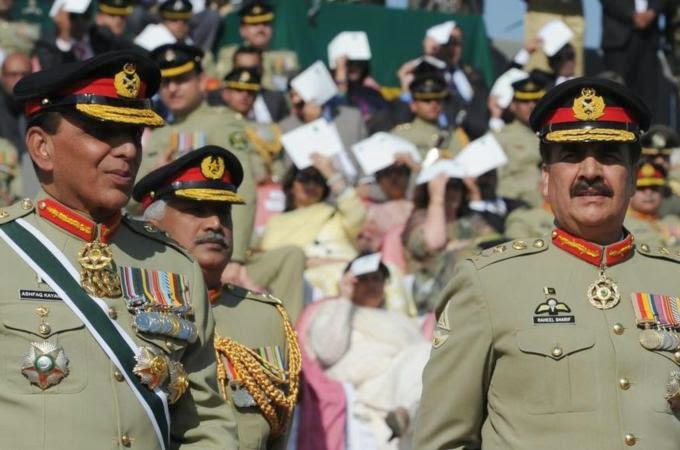 The United States has broken off diplomatic ties with Pakistan following a terrorist attack by the ISI-backed Haqqani group on the American Embassy in Islamabad in which some 40 American diplomats and personnel were killed. All American diplomatic personnel have been evacuated from Islamabad and the US President has ordered the nuclear-armed Fifth Fleet towards Karachi.
If you sat bolt upright and spilled coffee on reading the para above, you haven't been watching the television drama Homeland's Season 4, now into its 11th episode. After spending three seasons in the middle-east, Homeland, featuring a psychotic female CIA operative in the lead, has moved into Pakistan, often portraying the frayed US-Pakistan ties with startling accuracy, and as evident from this lead, with some hyperbole.
Pakistan's worthless, paranoid existence, its dalliance with terrorists groups, including its coddling of the Haqqani Group (who attack the US Embassy after inside information leaked by the compromised husband of the US ambassador), its spy agency ISI's treachery and double-dealing, Washington's own bumbling inter-agency fights, all feature in the action drama that has even spookdom — among nearly two million first time US viewers — in thrall.
But the constant feeling that courses through the hit series is the utter contempt and revulsion for Pakistan in Washington. "It's not even a real country. It's a fucking acronym!" sneers the CIA chief, calling Pakistan a "shithole" when Carrie Mathison, his principal agent, asks to be posted to Islamabad as station chief "They hate us. All they want is to stab us in the back," he spits out another time. In another episode, when a colleague tells Carrie the information came from the ISI, she snaps, "I don't trust the fuckers."

Incidentally, the two-faced, double-dealing ISI officer in the drama is played by the Indian actress Nimrat Kaur, who acted as a homemaker in The Lunchbox. In fact, most Pakistani principals in the serial are played by Indians or Brit-Asians. The serial was shot in South Africa.
So how close to reality is Homeland? The broad themes are all well-known and oft-recited in Washington: Pakistan's fostering of terrorism, ISI's double-dealing, the centrality of the army and intelligence in Pakistan, the ineffectualness of its democracy, etc. Where the series gets it right is the nitty-gritty, including drone attacks, suicide bombings, and a street shooting escapade that is redolent of the Raymond Davis episode.
Developed by the Israeli writer-director Gideon Raff, Homeland's screenplay is crafted by a team of experienced American writers. The serial's maker, Showtime, ostensibly hired former CIA operatives as consultants. Two former CIA agents, who between them boast of 60 years of operational experience and served as station chiefs in seven countries, reviewed the Season 4 finale in the Daily Beast last week and concluded that it has been able to "accurately present the mission, intensity, pace, contradictions and complexity of a CIA station."
Maintaining that the CIA protagonists portrayed in the serial "rings true to those us who have been there," the agents, Chuck Cogan and John MacGaffin, also underlined the difficulties in the fictional Islamabad station chief Carrie Mathison's attempts at dealing "a duplicitous host government and liaison service whose real interests and intent differs from hers."
"In reality, there is no such thing as a 'friendly' intelligence service. ISI, however, is the poster child for 'duplicitous,'" they added.
While Pakistan gets trashed in Homeland, in reality, the US approach to Pakistan and its intelligence agency, far from being castigatory or punitive, is feckless to the point of embarrassing. Despite repeatedly and even publicly admonishing Pakistan for supporting terror groups, and even citing ISI hand in the Mumbai attacks and for funneling money into the US political system (through the Kashmiri separatist Ghulam Nabi Fai), Washington has done little to reign in the terror-backing spy outfit and its proteges. This is evident given the ease with which Hafiz Saeed and now Zaki-ur Rehman Lakhvi have been protected by the Pakistani establishment.
In fact, according to ProPublica, former Pakistani army chief Ashfaq Kayani bluntly rejected the request of his American interlocutors to divest Lakhvi of his cellphone in prison. As if to rub it in, they even allowed him conjugal visits in jail through which he fathered a child, say Indian sources familiar with the developments, adding, with a degree of envy, that the "Pakistanis run rings around Americans." The Indian side also believes that successive Pakistani Army chiefs have made fools of Americans by alternately adopting an attitude of complete submission or threatening a reckless suicide scenario.
Every Pakistani general is greeted by Washington as a liberal, westernized, professional soldier, just because he plays golf or smokes or has pet dogs, one Indian official said in a recent conversation, recalling the glowing, credulous profiles in the US media that accompanied the ascension of Musharraf and Kayani. Every Pakistani general is a jihadi because it is written into their DNA and their motto Iman, Taqwa, Jihad fi Sabilillah, the official added bleakly.
It was against this background that the Indian side closely watched the visit last month of Pakistan's new army chief Gen Raheel Sharif, once again hailed by Pakistani apologists as a man who would take on terrorists. It was an unusual visit by any standard, lasting more than two weeks. Prefaced by ratcheted up coverage in the Pakistan media of an imminent ISIS (Islamic State) takeover of the country (and "scarily," its nukes), the trip was aimed ostensibly at repairing damaged relations with the US, and more importantly to extract money from Uncle Sam, long time patron of its informally designated terrorist client state on whom it has already splurged $ 28 billion sine 9/11.
The visit, which lasted the entire second half of November, got even more mysterious when after a few pro-forma meetings in Washington, a Pentagon ceremony to receive one of those feel-good medals the US hangs on its favored third world generals, a visit to the Central Command in Miami, and an engagement in the Bay Area, Sharif disappeared from view. He didn't go back home, and he dispensed with official protocol in America. The scuttlebutt was he was visiting a sibling or son in the Chicago area.
When he surfaced again at the end of the month, it was for an unusual weekend meeting with Secretary of State John Kerry, a long time patron saint of the Islamic Republic of Pakistan. In an engagement that effectively recognized the military as the de facto power in the country, Kerry, without a trace of irony, praised the Pakistani army as a "truly binding force," forgetting, perhaps in a senior moment, that the force actually lost half the country in 1971.
Co-author of a legislation that lavished billions of dollars on Pakistan throughout the years the country fostered terrorist groups, often killing US soldiers in Afghanistan, Kerry evokes mixed feelings among Indian interlocutors. On surface, he is affable and charming with Indian officials and speaks highly of India (he's headed for the Vibrant Gujarat summit in January). But his inexplicable support for Pakistan even when it is brazenly using terrorism as a policy instrument according to the administration's own insiders is something that baffles Indian officials, none of whom would speak on record.
In fact, Kerry's reputation as an apologist for Pakistan is vividly chronicled even in the opening title sequence of Homeland. Whereas Hillary Clinton is shown with her famous "You can't keep snakes in your backyard and expect them to only bite your neighbors," admonition of Pakistan, Kerry is shown defending the country, saying "there are things that Pakistan has done, as complicated as this relationship is."

In the days following the Kerry-Raheel meeting, it became evident that there are still things that Kerry and his ilk in Washington hope Pakistan will do, as complicated as this relationship is, in return of course for more life-giving aid, sustenance, and military hardware. Within days of Sharif's return to Pakistan, its military took out two prominent terrorists, including al-Qaida fugitive Adnan el-Shukrijumah (who had been on the lam for more than a decade) and Umar Farooq. In return, the US ordered the release of Latif Mehsud, the Pakistan Taliban's No 2 from a military prison in Afghanistan. Intelligence circles suspect the attack in the Army School in Peshawar is linked to this.
As far as the Indian side is concerned, all this is part of a continuing faustian bargain between US and Pakistan that will have no winners, only losers. The Pakistani DNA cannot be changed, even though the current situation offers a golden opportunity to change course. "External and internal shocks are often pivotal turning points encouraging countries to reorient their national security strategies," says Prof. T.V.Paul, an international relations scholar at McGill University and author of The Warrior State: Pakistan in the contemporary world. "But) it is hard to predict where this will lead, for an elite known for missing opportunities for change due to their narrow tactical as opposed to progressive vision on the future of the country."
Most US analysts too hold out bleak prospects of Pakistan revisiting its "good-terrorists-bad terrorists" policy. One exception: CNN's Peter Bergen, who described the Peshawar school attack as Pakistan's 9/11, recited the entire Pakistani military narrative of fighting terrorism, and wrote that "Today the Pakistani military understands that the Frankenstein that it helped to create must now be killed."
But Pakistan's own analysts were scoffing at the idea this would happen. "Pakistan's greatest enemy is denial," cautioned the country's former ambassador to US Hussain Haqqani, maintaining that the establishment, set in its ways, will not change easily. That became evident soon enough when it sprang 26/11 planner Zaki-ur Rehman from prison (ostensibly on bail), prompting Christine Fair, a Pakistan expert at Georgetown University, to note that even seasoned analyst such as Peter Bergen ''embrace rhetoric as fact.''
"Alas, the (Peshawar) attack — no matter how heinous — will not motivate Pakistan to abandon its long-held reliance upon Islamist militant groups," wrote Fair, reckoning that, "many tens of thousands of Pakistanis will die long before the army gives up its jihad habit." Under the headline "Crucible of terror threatening the world: How the future of Pakistan is getting darker," Michael Burleigh had this to note in the Daily Mail: "The venal political class in Pakistan has united in its revulsion at this latest atrocity, but by next week they'll be back to their old ways." It didn't take so long. Less than 48 hours elapsed between the Peshawar bombing, Lakhvi's release, and his temporary re-incarceration after a mostly Indian outcry.
------------------------------------------------------------------------------------------------------------
Malik Ishaq, dreaded chief of banned LeJ that has carried out attacks on minority Shias and the mastermind of the assault on the Sri Lankan cricket team in 2009, has been released after three years in jail with the Pakistan government not seeking an extension of his detention.
Ishaq has been under detention for the last three years under a public security order for making "provocative" speeches.
The government had detained Ishaq under Maintenance of Public Order (16 MPO), the same law under which key planner of 2008 Mumbai attacks Zakiur Rehman Lakhvi is being held after being granted bail by an anti-terrorism court.
The supreme court had granted Ishaq bail in July 2011 after which he was held under 16 MPO.
Ishaq's release comes even as the government considers "radical changes" to tackle militancy after the Taliban school massacre in which 148 people, mostly children, were killed in Peshawar.
Ishaq's release comes despite Prime Minister Nawaz Sharif's pledge to eradicate the "cancer" of sectarianism.

Posted by kuldeep singh chauhan at 01:45