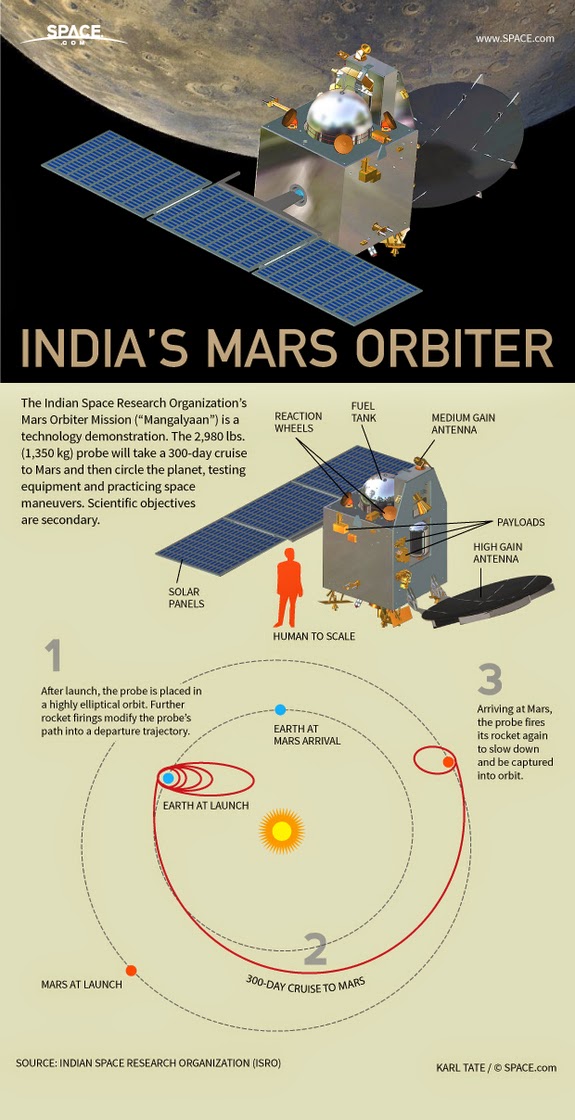 Everyone sat glued to their seats, anxious and tense at the Mission Operations Complex-2 (MOX-2), the nerve entre of India’s Mars mission on Wednesday morning. There was just one question on everybody’s mind: will it happen?
The answer came through Indian Space Research Organisation (ISRO) Chairman K. Radhakrishnan’s intercom. Mission Director V. Kesava Raju had given the thumbs up. The Chairman nodded calmly, went up to Prime Minister Narendra Modi and spoke a few words. A jubilant Mr. Modi hugged him, raised a fist and patted him on the back.
The gesture made it official. At 7.59 a.m., India had accomplished a gigantic feat of putting a spacecraft in orbit around Mars in its first attempt.
Around 150 ISRO engineers at MOX-2 and the neighbouring Mission Analysis Centre (MOX-1), where the media waited, broke into applause. “MOM successfully enters Martian orbit,” ISRO flashed on its monitors.
Dr. Radhakrishnan said, “We have done our best. India is great.”
The tryst with the Red Planet came 10 months after the ISRO launched its first orbiter to Mars on November 5 last year. But the final critical moment was at 7.17 a.m., when the main Liquid Apogee Motor (LAM) and the eight small thrusters on the orbiter ignited simultaneously and enabled the crucial manoeuvre.
All the engines fired flawlessly for 24 minutes and reduced the spacecraft’s velocity by 1.09 km per second; this contained the spacecraft in an orbit around Mars.
Praise for feat
Mr. Modi commended the ISRO scientists on “their incredible” feat. “MOM has met Mars. India has successfully reached Mars. History has been created today. We have reached the unknown and achieved the impossible,” he exulted.
“I am living my dream,” said MOM Project Director S. Arunan. Mr. Kesavara Raju called it “a great achievement for the country.”
The former Soviet Union and the U.S, who began their Mars pursuits in the 1960s, as well as Japan and China, failed in their first attempt to put their spacecraft into Martian orbit. The US Mariner-3 failed in 1964 and the Japanese Nozomi did not make it in 1998. Russia’s Phobos-Grunt mission, with a Chinese payload, failed in 2011.
The Mars Orbiter Mission (MOM) has kicked off its science phase and its five payloads are gathering data in full swing, said director of Isro's Space Application Centre, Kiran Kumar.
The MOM entered the Martian orbit on September 24 and made history by achieving success on its maiden flight. Google celebrated the first month the orbiter's entry to Mars with a doodle on October 24.
Speaking  on Wednesday, which marked the first anniversary of the MOM launch on November 5, 2013, Kumar said the data downloaded from the spacecraft at the Indian Deep Space Network in Byalalu, off the BangaloreMysore highway, is being transmitted to the principal investigators for analysis.
Kurian Mathew, principal investigator of the Methane Sensor For Mars, said: "We are analyzing data from both from Mars and comet Siding Spring. We will highlight them at an appropriate moment."
The Methane Sensor For Mars has been described as the "bridegroom" of all the payloads as its findings are expected to have huge ramifications. Indian Space Science Data Centre's general manager J D Rao could not hide his excitement. "We are anxiously waiting for the results," he told on Wednesday.
The quality of the pictures taken by the Mars Colour Camera in the last one-and-half month has attracted considerable praise from across the world. 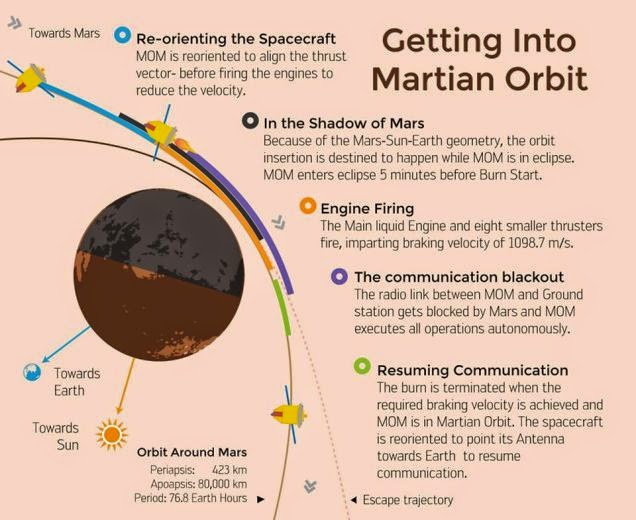 It's 3.2 Earth days. That's how much time Isro's Mars Orbiter Mission takes to go around Mars, the planet she'll orbit for at least six months even as there are plans to extend her life.
By late Wednesday, MOM would have completed two revolutions around the Red Planet and all the five payloads have been activated. The Mars Colour Camera (MCC) has already sent two sets of pictures.
The latest pictures released on Tuesday covered the regional dust storm activities over the northern hemisphere from an altitude of 7,450km above its surface.

Meanwhile, the committee under former Isro chairman UR Rao met earlier this week to work out the possibilities of MOM studying Comet Siding Spring, which is expected to go past Mars on October 19. "Now that MOM has completed one revolution around Mars, we know its position vis-a-vis the comet," Rao told.
Scientists are calibrating the various payloads. Rao said the final decision on what type of study should be conducted will be taken in October. Studies have shown that the comet has a lot of methane and water and the once-in-a-lifetime opportunity to study the comet has got even Nasa excited.

"Nasa is continuously monitoring the comet and their MAVEN spacecraft around Mars will also capture Siding Spring just like us. We're in touch with them," Rao said.
"The important payload to study the comet will be the methane sensor. But we'll have to work out the plan and what results we may expect with different options," another scientist said, adding, "A final decision will be taken around October 15 depending on MOM's position."
Studying the comet was not originally part of Isro's plan whose objective was to reach a Martian orbit and study the planet but scientists are now gearing up to send commands to study the comet.
MOM Completes 100 Days
As the world rings in the New Year on January 1 Indian space scientists will have another reason to uncork the champagne: The day will mark 100 days of the Mars Orbiter Mission (MOM) in the red planet's orbit.
What's more, MOM which was given a life span of 180 days may well continue to study Martian details for up to 15 years.
This is because the spacecraft has saved so much during the journey to Mars that it still has 37kg of fuel. It takes only two kg of fuel a year to keep MOM in orbit. The electronic systems which are tested for a life of more than 15 years will hold the key to MOM's longevity as they could get damaged in solar flares and unexpected incidents in space.
"We are so excited about the 100th day of MOM in orbit. So far the spacecraft has been in the pink of health. And it looks like it will live on for several years," MOM project director S Arunan told. Isro chairman K Radhakrishnan said scientists were looking forward to June — well past the spacecraft's assigned life of mid-March — when it will go through a phase of no communication with earth.

"This would last two weeks when the sun comes in between MOM and Earth cutting off the signal," said Radhakrishnan. "This will be an ultimate test for the spacecraft's autonomy (the ability to gauge its own health, remain in orbit and carry out experiments without orders from Earth)."
The Isro chairman said fuel was only one of the limiting factors of any spacecraft. "The life of a spacecraft depends also on the longevity of its batteries and electronic systems which we had subjected to endurance tests," he said.
The systems pass through what scientists call an 'infant mortality test,' were they undergo 168 hours of burn-in (under high temperatures). This is to ensure they withstand the extremities of space weather. "Our systems have passed all these tests, so hopefully MOM will have a long life," said Radhakrishnan.
That would mean a higher probability of spotting something interesting on and around Mars. MOM is fitted with five instruments, including a methane sensor that looks for methane — the definite indicator of past life — and an absorption cell photometer to pick up traces of deuterium and hydrogen which could suggest early existence of water on the red planet. The other instruments are a colour camera, an infrared spectrometer and a composition analyser.
Posted by kuldeep singh chauhan at 02:30