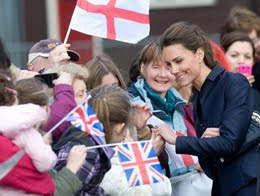 LONDON (AFP) – From the moment Prince William put his mother's sapphire and diamond ring on Kate Middleton's finger, comparisons between his wife-to-be and the late princess Diana became inevitable.

More than a decade after Diana's death, the "People's Princess" remains adored and the new royal bride will be measured against the young, shy blonde who captivated the world at her wedding to Prince Charles in 1981.

The royals are understandably wary of comparisons between the two women, and William himself insisted soon after the engagement that "no one is trying to fill my mother's shoes".

Diana's marriage was a famously unhappy union which broke down amid infidelity on both sides, ending in a bitter divorce and then tragedy, when the princess died in a Paris car crash in 1997.

It is not a tale to comfort a nervous bride, but fortunately, commentators see more differences than similarities between the two women.

Despite her lack of aristocratic blood, Kate will be far better prepared than Diana ever was for royal life when she walks down the aisle of Westminster Abbey on April 29.

"Kate's been very carefully groomed, it's been a long process over a period of time and she's got people around her who understand the modern media.

"She knows exactly what she's getting," said Max Clifford, a top British PR man who has represented many celebrities.

Kate and William have been together for eight years, whereas Diana was courted for just six months. In fact, Kate has been waiting so long for her boyfriend to pop the question that the press dubbed her "Waity Katy".

But Clifford says the length of time puts their relationship on a strong footing, saying "William seems to be totally in love with her and vice versa".

The young couple have had a very modern courtship.

They lived together while at St Andrews University in Scotland, where they met, and in recent months Kate has stayed with William on the island of Anglesey in Wales, where he works as a helicopter search and rescue pilot.

At the age of 29, Kate also has considerable life experience compared to Diana, who was only 20 on her wedding day, 12 years younger than Charles. Just five months separate Kate and William, who is 28.

Diana had left school before finishing her studies and her work experience was limited to a stint at a nursery.

By contrast, Kate graduated with a degree in art history from a top university, although her jobs as an accessories buyer for a clothing brand and then for her family's party goods firm have been criticised as lightweight.

Kate also had a happier and more stable childhood than Diana, whose parents divorced when she was young. Kate is close to her mother Carole and sister Pippa, her maid of honour, and says her family is a major source of support.

Up to now, William's bride has also had a better relationship with the press, which hounded the late princess right up to the moment of her death.

Despite a rocky start following Kate's move to London after graduation, when photographers mobbed her every time she left the house, warning letters from lawyers and the palace have caused the media to back off.

Kate "is an intelligent girl. She has a good head on her shoulders and is so much older than Diana was and she knows William," said royal historian Hugo Vickers.

The royal family "must be delighted. She's cautious. She's very measured -- confidence is not quite the right word, but she is assured," he added.

Diana was beautiful, charismatic and almost universally loved, but she was also unstable and the explosive fallout of her split with Charles cast a pall over the royal family that is only now starting to lift.

She also overshadowed the other royals, staying firmly in the limelight even after the divorce through her charitable causes.

"Diana became far more popular worldwide than the royal family, and in this country -- she was the one everyone wanted to see, wanted to hear, wanted to be around," said Clifford.

The royals "would have learned from that", he said.

Kate has shown no sign of Diana's love of publicity, although only time will tell how far her careful plans survive the pressure of being a fully paid-up member of the royal family.
Posted by kuldeep singh chauhan at 05:09