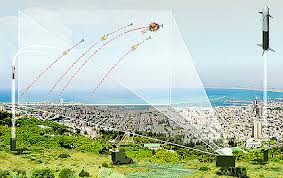 India has signaled that it is ready to deploy a home-grown Ballistic Missile Defence (BMD) system in the near future with a successful testing of an advanced interceptor missile, prompting the defence scientists to claim a shield could be thrown over Delhi skies by 2014.

The big fireworks over the Bay of Bengal when India tested its experimental BMD system resulted in elation as the trial turned out to be "bang-on accurate".

The interceptor missile destroyed an incoming target missile in a direct hit at an altitude of nearly 15 km over the Bay of Bengal, demonstrating the efficacy of the system.

DRDO officials said the electronically simulated target, which mimicked a missile coming from a distance of 1,500 km, was electronically hit at an altitude of 120 km.

Within minutes of the launch of the real attacker missile, a modified surface-to-surface Prithvi from Chandipur, Advanced Air Defence (AAD) missile, the actual interceptor, took off from Wheeler Island and destroyed the 'hostile' missile at an altitude of 15 km in the endo-atmospheric mode at 12.52 p.m.

Missile technologists from the Defence Research and Development Organisation (DRDO) for the first time tested the configuration for destroying an incoming actual missile and another electronically simulated missile. The score: BMD - 2, Enemy Missiles - 0.

Celebrations broke out at Wheeler Island following the success of the mission, which was the eighth ballistic interceptor missile test. So far seven missions have been successful and one of them, the first one was conducted in exo-atmopshere at an altitude of 48 km in November 2006.

This was the seventh time the BMD system has been tested successfully over the last six years and promptly, the DRDO declared a missile shield could be deployed for New Delhi by 2014.

"We are now ready to convert the BMD system from an experimental to an operational one that can be deployed on demand. I am confident we can deploy the Phase-I of the BMD system by 2014," said DRDO chief V K Saraswat said of the result from the Wheeler Island test range off Odisha coast.

All said and done, even American missile defence systems like Patriot Advanced Capability-3, Aegis BMD-3 and THAAD (terminal high-altitude area defence), as also Russian and Israeli ones, are not fully foolproof as of now and further efforts are on to perfect them.

As soon as the target missile was launched, the Long-Range Tracking Radars and the Multi-Functional Radars traced it and passed on the data to the guidance computer to launch the AAD, which homed on to the target missile and pulverised it.

In the latest BDM test, only one of the incoming missiles was real: a modified Prithvi missile mimicking M-9/M-11 class of Chinese Dong Feng short-range ballistic missiles. The other was an electronically simulated missile of a longer range of 1,500km.

But both the 'enemy' missile launches were, however, conducted "in the same window" to test the BMD system's capability to handle "multiple threats" simultaneously.

"This has been done only by the two superpowers (US and Russia) till now. The real missile was destroyed at an altitude of 14.7-km by the interceptor missile with a direct hit," Saraswat was quoted as saying.

"The entire test was done practically in deployment configuration," he said.

Meanwhile, DRDO has also begun work on adding a third tier to the BMD system.

The existing two-tier system is designed to track and destroy ballistic missiles both inside (endo) and outside (exo) the earth's atmosphere. The third layer is planned to tackle low-flying cruise missiles, artillery projectiles and rockets in the line with the overall aim to achieve "near 100% kill or interception probability".

"Look what is happening in the Middle-East (Hamas firing rockets at Israeli cities before the recent ceasefire)...hence, protection against low-cost, very close range threats is also needed. We have begun some initial work on the third-tier. We will try to integrate it with the BMD system once it fructifies," Saraswat said.

At present, the BMD system's phase-1, under which interceptors fly at 4.5 Mach high-supersonic speeds to intercept enemy missiles, is meant to tackle hostile missiles with a 2,000-km strike range.

Under DRDO's plans, the BMD phase-2 will take on 5,000-km range missiles, virtually in the class of intercontinental ballistic missiles (ICBM), with interceptors at hypersonic speeds of 6-7 Mach.

During the present test, Long Range Radar and MFC Radar located far away could detect the enemy missile from take-off and tracked it through its entire path. The total trajectory of the incoming Missile was continuously estimated by the guidance computer and subsequently the AAD Missile was launched at an appropriate time to counter and kill the ballistic missile, DRDO officials said.

"The Ring Laser Gyro-based navigation system in target, Fibre Optic Gyro based INS in Interceptor, on board computers, guidance systems, actuation systems and the critical RF Seekers used for the terminal phase have performed excellently," a defence scientist said.

"This has proved the capability of DRDO to handle multiple targets with multiple interceptors simultaneously. The complete Radar Systems, Communication Networks, Launch Computers, Target update Systems and state-of-the-art Avionics have been completely proven in this mission," he added.