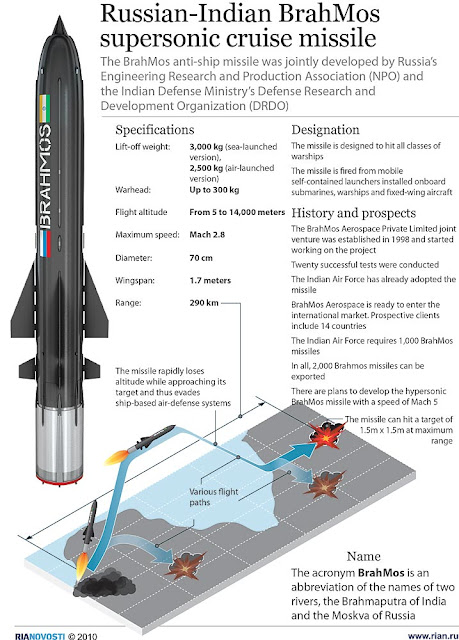 India’s BrahMos supersonic missile has turned into a ‘super rocket’ with its latest technological addition that will enhance its strategic capabilities. The Indian BrahMos supersonic cruise missile has been augmented by the installation of the advanced satellite navigation systems from Russia’s Kh-555 and Kh-101 strategic long-range cruise missiles. The GPS-GLONASS technology has been added to the current Doppler-inertial platform.
This latest integration of the navigation systems from Kh-555 will lend the BrahMos supersonic cruise missile a sub-strategic capability above its normal tactical range. The latest integration will enable BrahMos to hit targets over 300-500 kilometres from sea, land and air launchers. It is also capable of being armed with a nuclear warhead.
According to BrahMos, the installation of the advanced navigation system is specifically configured and optimized for the new air-launched version of BrahMos. This new version of BrahMos will be used by India’s Russian-built Sukhoi Su-30MKI strike fighters and this lethal combination will extend India’s long-range strike capability.
With this latest development, BrahMos missile is advancing from a tactical strike one to a strategic one. The capabilities of the BrahMos will now be more lethal coupled with its vertical steep dive at supersonic speeds. India plans to deploy over 200 advanced Sukhoi Su-30 MKI strike aircraft by 2020 for the air launched version of BrahMos.
Earlier this week, the Indian Navy successfully test-fired a highly-maneuverable version of the 290-km range BrahMos supersonic cruise missile from a warship off the Goa coast. The missile, which was fired without a warhead, hit the target ship after performing intricate maneuvers. The weapon did not take a straight attack path and kept turning around before hitting the target and this capability will make it difficult for the enemy to locate the Indian warships during operations.
Posted by kuldeep singh chauhan at 03:53