The Geopolitics of China 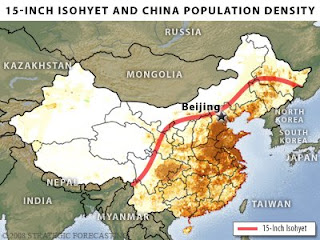 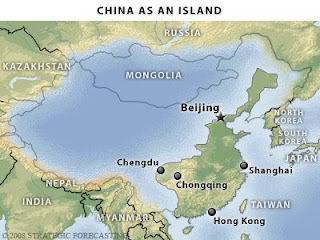 Contemporary China is an island. Although it is not surrounded by water (which borders only its eastern flank), China is bordered by terrain that is difficult to traverse in virtually any direction. There are some areas that can be traversed, but to understand China we must begin by visualizing the mountains, jungles and wastelands that enclose it. This outer shell both contains and protects China.

Internally, China must be divided into two parts: the Chinese heartland and the non-Chinese buffer regions surrounding it. There is a line in China called the 15-inch isohyet, east of which more than 15 inches of rain fall each year and west of which the annual rainfall is less. The vast majority of Chinese live east and south of this line, in the region known as Han China — the Chinese heartland. The region is home to the ethnic Han, whom the world regards as the Chinese. It is important to understand that more than a billion people live in this area, which is about half the size of the United States.

The Chinese heartland is divided into two parts, northern and southern, which in turn is represented by two main dialects, Mandarin in the north and Cantonese in the south. These dialects share a writing system but are almost mutually incomprehensible when spoken. The Chinese heartland is defined by two major rivers — the Yellow River in the north and the Yangtze in the South, along with a third lesser river in the south, the Pearl. The heartland is China’s agricultural region. However — and this is the single most important fact about China — it has about one-third the arable land per person as the rest of the world. This pressure has defined modern Chinese history — both in terms of living with it and trying to move beyond it.


A ring of non-Han regions surround this heartland — Tibet, Xinjiang province (home of the Muslim Uighurs), Inner Mongolia and Manchuria (a historical name given to the region north of North Korea that now consists of the Chinese provinces of Heilongjiang, Jilin and Liaoning).

These are the buffer regions that historically have been under Chinese rule when China was strong and have broken away when China was weak. Today, there is a great deal of Han settlement in these regions, a cause of friction, but today Han China is strong.


These are also the regions where the historical threat to China originated. Han China is a region full of rivers and rain. It is therefore a land of farmers and merchants. The surrounding areas are the land of nomads and horsemen. In the 13th century, the Mongols under Ghenghis Khan invaded and occupied parts of Han China until the 15th century, when the Han reasserted their authority. Following this period, Chinese strategy remained constant: the slow and systematic assertion of control over these outer regions in order to protect the Han from incursions by nomadic cavalry. This imperative drove Chinese foreign policy. In spite of the imbalance of population, or perhaps because of it, China saw itself as extremely vulnerable to military forces moving from the north and west. Defending a massed population of farmers against these forces was difficult. The easiest solution, the one the Chinese chose, was to reverse the order and impose themselves on their potential conquerors.

There was another reason. Aside from providing buffers, these possessions provided defensible borders. With borderlands under their control, China was strongly anchored. Let’s consider the nature of China’s border sequentially, starting in the east along the southern border with Vietnam and Myanmar. The border with Vietnam is the only border readily traversable by large armies or mass commerce. In fact, as recently as 1979, China and Vietnam fought a short border war, and there have been points in history when China has dominated Vietnam. However, the rest of the southern border where Yunnan province meets Laos and Myanmar is hilly jungle, difficult to traverse, with almost no major roads. Significant movement across this border is almost impossible. During World War II, the United States struggled to build the Burma Road to reach Yunnan and supply Chiang Kai-shek’s forces. The effort was so difficult it became legendary. China is secure in this region.


Hkakabo Razi, almost 19,000 feet high, marks the border between China, Myanmar and India. At this point, China’s southwestern frontier begins, anchored in the Himalayas. More precisely, it is where Tibet, controlled by China, borders India and the two Himalayan states, Nepal and Bhutan. This border runs in a long arc past Pakistan, Tajikistan and Kyrgyzstan, ending at Pik Pobedy, a 25,000-foot mountain marking the border with China, Kyrgyzstan and Kazakhstan. It is possible to pass through this border region with difficulty; historically, parts of it have been accessible as a merchant route. On the whole, however, the Himalayas are a barrier to substantial trade and certainly to military forces. India and China — and China and much of Central Asia — are sealed off from each other.

The one exception is the next section of the border, with Kazakhstan. This area is passable but has relatively little transport. As the transport expands, this will be the main route between China and the rest of Eurasia. It is the one land bridge from the Chinese island that can be used. The problem is distance. The border with Kazakhstan is almost a thousand miles from the first tier of Han Chinese provinces, and the route passes through sparsely populated Muslim territory, a region that has posed significant challenges to China. Importantly, the Silk Road from China ran through Xinjiang and Kazakhstan on its way west. It was the only way to go.

There is, finally, the long northern border first with Mongolia and then with Russia, running to the Pacific. This border is certainly passable. Indeed, the only successful invasion of China took place when Mongol horsemen attacked from Mongolia, occupying a good deal of Han China. China’s buffers — Inner Mongolia and Manchuria — have protected Han China from other attacks. The Chinese have not attacked northward for two reasons. First, there has historically not been much there worth taking. Second, north-south access is difficult. Russia has two rail lines running from the west to the Pacific — the famous Trans-Siberian Railroad (TSR) and the Baikal-Amur Mainline (BAM), which connects those two cities and ties into the TSR. Aside from that, there is no east-west ground transportation linking Russia. There is also no north-south transportation. What appears accessible really is not.

The area in Russia that is most accessible from China is the region bordering the Pacific, the area from Russia’s Vladivostok to Blagoveschensk. This region has reasonable transport, population and advantages for both sides. If there were ever a conflict between China and Russia, this is the area that would be at the center of it. It is also the area, as you move southward and away from the Pacific, that borders on the Korean Peninsula, the area of China’s last major military conflict.

Then there is the Pacific coast, which has numerous harbors and has historically had substantial coastal trade. It is interesting to note that, apart from the attempt by the Mongols to invade Japan, and a single major maritime thrust by China into the Indian Ocean — primarily for trade and abandoned fairly quickly — China has never been a maritime power. Prior to the 19th century, it had not faced enemies capable of posing a naval threat and, as a result, it had little interest in spending large sums of money on building a navy.

China, when it controls Tibet, Xinjiang, Inner Mongolia and Manchuria, is an insulated state. Han China has only one point of potential friction, in the southeast with Vietnam. Other than that it is surrounded by non-Han buffer regions that it has politically integrated into China. There is a second friction point in eastern Manchuria, touching on Siberia and Korea. There is, finally, a single opening into the rest of Eurasia on the Xinjiang-Kazakh border.

China’s most vulnerable point, since the arrival of Europeans in the western Pacific in the mid-19th century, has been its coast. Apart from European encroachments in which commercial interests were backed up by limited force, China suffered its most significant military encounter — and long and miserable war — after the Japanese invaded and occupied large parts of eastern China along with Manchuria in the 1930s. Despite the mismatch in military power and more than a dozen years of war, Japan still could not force the Chinese government to capitulate. The simple fact was that Han China, given its size and population density, could not be subdued. No matter how many victories the Japanese won, they could not decisively defeat the Chinese.

China is hard to invade; given its size and population, it is even harder to occupy. This also makes it hard for the Chinese to invade others — not utterly impossible, but quite difficult. Containing a fifth of the world’s population, China can wall itself off from the world, as it did prior to the United Kingdom’s forced entry in the 19th century and as it did under Mao Zedong. All of this means China is a great power, but one that has to behave very differently from other great powers.
Posted by kuldeep singh chauhan at 05:51