The Geopolitics of India 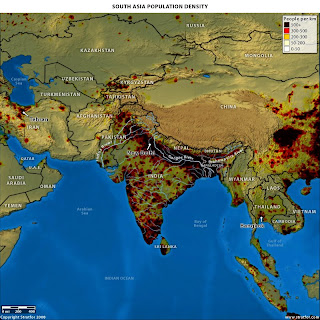 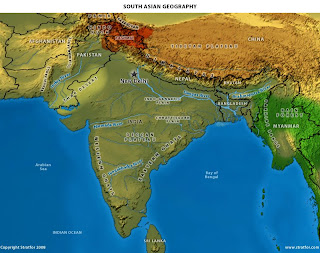 The geopolitics of India must be considered in the geographical context of the Indian subcontinent — a self-contained region that includes India, Pakistan, Bangladesh and, depending how one defines it, Nepal and Bhutan. We call the subcontinent “self-contained” because it is a region that is isolated on all sides by difficult terrain or by ocean. In geopolitical terms it is, in effect, an island.

This “island” is surrounded on the southeast, south and southwest by the Bay of Bengal, the Indian Ocean and the Arabian Sea. To the west, it is isolated by mountains that rise from the Arabian Sea and run through Pakistan’s Baluchistan province, stretching northward and rising higher and higher to the northwestern corner of Pakistan. There, at the Hindu Kush, the mountain chain swings east, connecting with the Pamir and Karakoram ranges. These finally become the Himalayas, which sweep southeast some 2,000 miles to the border of Myanmar, where the Rakhine Mountains emerge, and from there south to India’s border with Bangladesh and to the Bay of Bengal. The Rakhine are difficult terrain not because they are high but because, particularly in the south, they are covered with dense jungle.

The Geography of the Subcontinent

* the mountainous frame that stretches in an arc from the Arabian Sea to the Bay of Bengal;
* the North Indian Plain, stretching from Delhi southeast through the Ganges River delta to the Myanmar border, and from the Himalayas in the north to the southern hills;
* the Indian Peninsula, which juts southward into the Indian Ocean, consisting of a variety of terrain but primarily hilly;
* the deserts in the west between the North Indian Plain and Pakistan’s Indus River Valley.

Pakistan occupies the western region of the subcontinent and is based around the Indus Valley. It is separated from India proper by fairly impassable desert and by swamps in the south, leaving only Punjab, in the central part of the country, as a point of contact. Pakistan is the major modern-day remnant of Muslim rule over medieval India, and the country’s southwest is the region first occupied by Arab Muslims invading from what is today southwestern Iran and southern Afghanistan.

The third major state in the subcontinent is the Muslim-majority Ganges delta state of Bangladesh, which occupies the area southeast of Nepal. Situated mainly at sea level, Bangladesh is constantly vulnerable to inundations from the Bay of Bengal. The kingdoms of Nepal and Bhutan rest on the heights of the Himalayas themselves, and therefore on the edge of the subcontinent. There is also a small east-west corridor between Nepal and Bangladesh connecting the bulk of India to its restive northeastern states and its eastern border with Myanmar. In this region is India’s easternmost state, Arunachal Pradesh, whose territory is also claimed by China.

The bulk of India’s population lives on the northern plain. This area of highest population density is the Indian heartland. It runs through the area around Lahore, spreading northwest into Pakistan and intermittently to Kabul in Afghanistan, and also stretching east into Bangladesh and to the Myanmar border. It is not, however, the only population center. Peninsular India also has an irregular pattern of intense population, with lightly settled areas intermingling with heavily settled areas. This pattern primarily has to do with the availability of water and the quality of soil. Wherever both are available in sufficient quantity, India’s population accumulates and grows.

India is frequently compared geographically to non-Russian Europe because both are peninsulas jutting out of the Eurasian land mass. They have had radically different patterns of development, however.

The Europeans developed long-standing and highly differentiated populations and cultures, which evolved into separate nation-states such as Spain, France, Germany and Poland. Their precise frontiers and even independence have varied over time, but the distinctions have been present for centuries — in many cases predating the Roman Empire. The Indian subcontinent, on the other hand, historically has been highly fragmented but also fluid (except when conquered from the outside). Over fairly short periods of time, the internal political boundaries have been known to shift dramatically.

The reason for the difference is fairly simple. Europe is filled with internal geographic barriers: The Alps and Pyrenees and Carpathians present natural boundaries and defensive lines, and numerous rivers and forests supplement these. These give Europe a number of permanent, built-in divisions, with defined political entities and clear areas of conflict. India lacks such definitive features. There are no internal fortresses in the Indian subcontinent, except perhaps for the Thar Desert.

Instead, India’s internal divisions are defined by its river systems: the Ganges, the Brahmaputra, the Narmada and so on. All of India’s major cities are centered around one of these river systems, a fact that has been instrumental in the rise of so many distinct cultures in India — Punjabis, Gujaratis, Marathis, Tamils and others — which have manifested in modern times as states within India. That said, Indian nationalism is very strong and counters the separatist tendencies. There is a balance between a strong central governance and substantial regional autonomy.

What is permanent in the subcontinent is the frame, the mountains, and beyond these the wastelands. We can see this most clearly when looking at the population distribution of the surrounding regions. The subcontinent is isolated as a population center, surrounded by comparatively empty regions. It is not only a question of the mountains around it, although those are substantial barriers; the terrain beyond the mountains in every direction is sparsely populated, and in many ways its resources are insufficient to support a sizable, sedentary civilization. As a result, India has rarely demonstrated an appetite for adventurism beyond the subcontinent. If India can find a way to manage Pakistan and Bangladesh, there is little pressure to do anything more.
Posted by kuldeep singh chauhan at 06:23