The Geopolitics of Israel 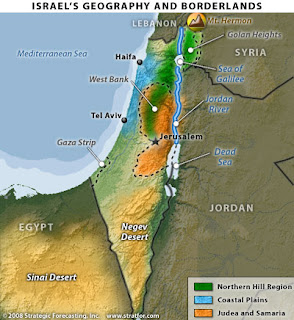 The founding principle of geopolitics is that place — geography — plays a significant role in determining how nations will behave. If that theory is true, then there ought to be a deep continuity in a nation’s foreign policy. Israel is a laboratory for this theory, since it has existed in three different manifestations in roughly the same place, twice in antiquity and once in modernity. If geopolitics is correct, then Israeli foreign policy, independent of policymakers, technology or the identity of neighbors, ought to have important common features.

Israel is well-buffered in three directions. The Sinai Desert protects it against the Egyptians. In general, the Sinai has held little attraction for the Egyptians. The difficulty of deploying forces in the eastern Sinai poses severe logistical problems for them, particularly during a prolonged presence. Unless Egypt can rapidly move through the Sinai north into the coastal plain, where it can sustain its forces more readily, deploying in the Sinai is difficult and unrewarding. Therefore, so long as Israel is not so weak as to make an attack on the coastal plain a viable option, or unless Egypt is motivated by an outside imperial power, Israel does not face a threat from the southwest.

Israel is similarly protected from the southeast. The deserts southeast of Eilat-Aqaba are virtually impassable. No large force could approach from that direction, although smaller raiding parties could. The tribes of the Arabian Peninsula lack the reach or the size to pose a threat to Israel, unless massed and aligned with other forces. Even then, the approach from the southeast is not one that they are likely to take. The Negev is secure from that direction.

Israel’s vulnerability is in the north. There is no natural buffer between Phoenicia and its successor entities (today’s Lebanon) to the direct north. The best defense line for Israel in the north is the Litani River, but this is not an insurmountable boundary under any circumstance. However, the area along the coast north of Israel does not present a serious threat. The coastal area prospers through trade in the Mediterranean basin. It is oriented toward the sea and to the trade routes to the east, not to the south. If it does anything, this area protects those trade routes and has no appetite for a conflict that might disrupt trade. It stays out of Israel’s way, for the most part.

Moreover, as a commercial area, this region is generally wealthy, a factor that increases predators around it and social conflict within. It is an area prone to instability. Israel frequently tries to extend its influence northward for commercial reasons, as one of the predators, and this can entangle Israel in its regional politics. But barring this self-induced problem, the threat to Israel from the north is minimal, despite the absence of natural boundaries and the large population. On occasion, there is spillover of conflicts from the north, but not to a degree that might threaten regime survival in Israel.

The neighbor that is always a threat lies to the northeast. Syria — or, more precisely, the area governed by Damascus at any time — is populous and frequently has no direct outlet to the sea. It is, therefore, generally poor. The area to its north, Asia Minor, is heavily mountainous. Syria cannot project power to the north except with great difficulty, but powers in Asia Minor can move south. Syria’s eastern flank is buffered by a desert that stretches to the Euphrates. Therefore, when there is no threat from the north, Syria’s interest — after securing itself internally — is to gain access to the coast. Its primary channel is directly westward, toward the rich cities of the northern Levantine coast, with which it trades heavily. An alternative interest is southwestward, toward the southern Levantine coast controlled by Israel.

As can be seen, Syria can be interested in Israel only selectively. When it is interested, it has a serious battle problem. To attack Israel, it would have to strike between Mount Hermon and the Sea of Galilee, an area about 25 miles wide. The Syrians potentially can attack south of the sea, but only if they are prepared to fight through this region and then attack on extended supply lines. If an attack is mounted along the main route, Syrian forces must descend the Golan Heights and then fight through the hilly Galilee before reaching the coastal plain — sometimes with guerrillas holding out in the Galilean hills. The Galilee is an area that is relatively easy to defend and difficult to attack. Therefore, it is only once Syria takes the Galilee, and can control its lines of supply against guerrilla attack, that its real battle begins.

To reach the coast or move toward Jerusalem, Syria must fight through a plain in front of a line of low hills. This is the decisive battleground where massed Israeli forces, close to lines of supply, can defend against dispersed Syrian forces on extended lines of supply. It is no accident that Megiddo — or Armageddon, as the plain is sometimes referred to — has apocalyptic meaning. This is the point at which any move from Syria would be decided. But a Syrian offensive would have a tough fight to reach Megiddo, and a tougher one as it deploys on the plain.

On the surface, Israel lacks strategic depth, but this is true only on the surface. It faces limited threats from southern neighbors. To its east, it faces only a narrow strip of populated area east of the Jordan. To the north, there is a maritime commercial entity. Syria operating alone, forced through the narrow gap of the Mount Hermon-Galilee line and operating on extended supply lines, can be dealt with readily.
Posted by kuldeep singh chauhan at 06:14