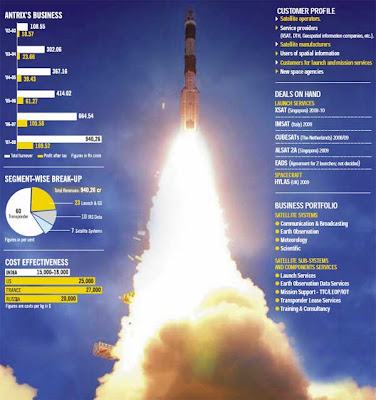 It was up and away in a plume of fire almost before the human eye could capture it.
When Chandrayaan-1 sends a probe crashing into the moon’s surface at 1 km per second, it will raise not only a cloud of dust for scientific study but also the pride of Indians (the tricolour has been painted on the probe). Critics say that satisfying the Indian pride is the mission’s main objective and consider the Rs 386-crore bill a waste since the moon has been well researched by the major powers and has not thrown up anything interesting.

ISRO disagrees, and says the missions of the US and Russia (then the USSR) focussed on the moon’s equatorial region while its own payload is equipped for a total mapping. “Our payload is unique… It is more comprehensive for the total mapping of the moon,’’ says G. Madhavan Nair, chairman, ISRO, adding: “ISRO is the only space agency in the world, which has made use of technology to improve the life of the common man.”

He cites a study that quantified the benefits of the space programme as 1.5 times the spending of $2 billion so far. “In our budget of less than $1 billion (ISRO’s budget for 2008-09 is Rs 4,074 crore; NASA’s budget is $20 billion or Rs 98,000 crore), 80 per cent is being used to benefit the common man,’’ he says, referring to remote sensing, telemedicine and tele-education.

So, was Chandrayaan-1 about expanding scientific knowledge of the moon or upgrading ISRO’s technological capabilities? Both; while the first is a shot in the unknown, the second has concrete benefits—as seen from the steep trajectory of income and profits reported by ISRO’s business arm, Antrix Corporation. Nair is Chairman of Antrix, too.

Even before Chandrayaan’s launch, while India and the world were worrying over the global financial meltdown, Antrix had crossed a milestone unnoticed and unheralded. It delivered a communications satellite, the W2M, to the Paris-based Eutelstat, a leading telecom operator, on October 18.

Although the W2M satellite—unlike the home-grown Chandrayaan-1—was conceived and built in association with EADS Astrium, the European satellite major, it was the first complete commercial satellite built by ISRO for a foreign client. Antrix is tight-lipped about the size of the deal or its share, but insiders said the contract was worth about Rs 350 crore, or close to Chandrayaan’s cost.

As the W2M was shipped, K.R. Sridhara Murthi, Antrix’s Managing Director, had told Business Today: “Today is a great day for us. For the first time, India has shipped a commercial satellite for export.”

The outside world had little clue about W2M, but Antrix does not mind. It is now putting together another satellite, Hylas, for a UKbased client, even as ISRO works on Chandrayaan-2. “Work on Chandrayaan-2 will start soon… It will contain an orbiter, a lander to soft-land in the moon and a rover to pick up samples and analyse them,” says Nair, adding: “Mars is our next challenge.”

On the edge
ISRO’s edge so far has been its ability to offer the cheapest platform for launching “light” satellites, even as it faces tough competition from global players in all its segments—satellite building and launching, and offering transponders on its satellites.

“We are not operating in isolation. We have adopted the cooperate-and-compete approach... that is how we have to do business and survive,’’ says Murthi. Antrix is not ready to spell out its rates vis-a-vis those of the competition, but Murthi says: “We can be 30 per cent cheaper if we can have an end-to-end value addition—from design to delivery of service.” And that has not happened yet.

Antrix is not the only one reaping gains. India’s private sector has latched on to the subcontracts from the space programme. The domestic industry, apart from meeting 30-35 per cent of ISRO’s orders for components and services, also gets orders from Antrix worth 20-30 per cent of its annual revenue, which is expected to be Rs 940crore in 2008-09. For example, the Rs 100-crore deep-space network built by the public sector Electronics Corporation of India (ECIL) on Bangalore’s outskirts, had components built by many others, including private sector Indian companies.

Apart from majors like ECIL or Godrej, ISRO’s activities have helped scores of medium-scale industries like Avasarala Technologies in Bangalore and Astra Microwave Products and MTAR, both in Hyderabad. “Over the last two years, we have got orders worth Rs 25 crore each from ISRO, and I think the orders are only going to rise in the coming years,” says B. Malla Reddy, MD & CEO of the listed Astra, which supplies transmit/ receive (TR) modules for remote sensing satellites, automatic weather stations and C-band and Ku-band receivers.

Growth trajectory
Antrix reported revenues of Rs 940 crore and a profit after tax of Rs 168 crore in 2007-08, an increase of 41 per cent and 60 per cent, respectively, on the corresponding figures for the previous year. “Antrix is an amazing success story. It was started with equity of just Rs 1 crore in 1994, and you can see where it is now,” says S.V. Ranganath, Special Secretary (Finance), in the Department of Space.

U. Sankar, author of The Economics of India’s Space Programme, notes that ISRO’s market opportunities lie in, among others, the launch of small satellites in polar orbits. “Its unit launch cost is lower because of its learning-bydoing approach, lower cost of technical manpower and lower risk,” says the honorary professor at the Madras School of Economics.

S.R. Kulkarni, Professor of Astronomy & Planetary Sciences at Caltech, says the future of the space business and space science is quite bright. “India need not travel the same path as the pioneers or the new entrants, but can blaze a distinct trail by building on her strengths,”’ he says.As for Chandrayaan itself, the possibilities for commercial gains are quite distant. “Right now, it will be premature to talk of the commercial spin-offs from Chandrayaan-1. But at a later stage we will think of possible launch opportunities for any private initiatives for moon probes and lunar missions. Like, for instance, small satellites, which will be launched either through private enterprises or through space agencies,’’ says Murthi.

Escape velocity
ISRO has more immediate challenges on hand than a manned space mission or a Mars landing. It is in establishing itself as a significant player in the multi-billion dollar commercial satellite launch business. With the PSLV, ISRO has become a reliable low-cost player and can launch 1,600 kg satellites into their intended orbits. Chandrayaan-1 was the 13th consecutive successful launch of a PSLV—the workhorse has so far carried aloft 30 satellites, including 16 foreign ones.

But the same cannot be said about the Geosynchronous Satellite Launch Vehicle, which can carry heavier and costlier telecommunications satellites. The GSLV’s record has been patchy, because India is yet to develop the required expertise in cryogenic rocket engines.

“We are not ready for that yet. We have the capability to launch I2K-class spacecraft (weighing about 2,000 kg) only. When we develop GSLV Mark 3, we can offer (launch) services for satellites weighing around 4,000 kg,” explains Murthi of Antrix.

ISRO hopes to perfect the GSLV by 2010, as it has made some advances with the cryogenic rocket engine technology. The cryogenic engine in a GSLV’s upper (third) stage gives it the required injection velocity. The GSLV launches so far have used the seven engines supplied by Russia since 1996. But Russia stopped supplies following US pressure over the supply of this dual-use technology. Cryogenic enbtgines are hard to build, and India has just started making some progress after its initial failures.

The GSLV will give ISRO the escape velocity needed to enter the business of launching heavy satellites with its clear cost advantage (some say as much as 25 per cent).

“ISRO has multiplied its launches over the years. Earlier, we did one launch a year. Now we do four. Next year, it is likely to be six. Priority was given for PSLV and Chandrayaan-1. But we have kept GSLV’s sub-systems ready,’’ Nair admits.

As for the GSLV Mark III, ISRO officials say that three important ground tests will be conducted some time next year and the first launch will happen by 2010 end or early 2011.

ISRO is also working on a re-usable launch vehicle. Re-use of the various stages of PSLV and GSLV will reduce launch costs dramatically. “The re-usable launch vehicle is still in a concept stage. Over the next two years, we will need to do demonstration projects… and expect one to be ready to use in 2020 or so,” Nair says.
Posted by kuldeep singh chauhan at 02:25