A Bad Fortune for the Vietnamese 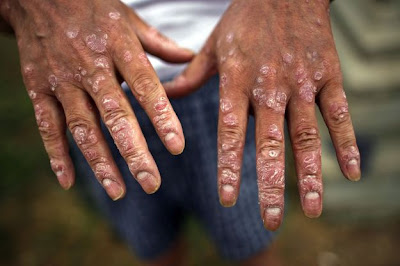 At Bien Hung lake, whose water before contamination had been a deep blue, a dirty, gray viscous scum stretched from shore to shore. The lake is about one kilometer from the Bien Hoa air base in Dong Nai province, where, during the war, the American military had stored Agent Orange. Every day, American planes left this base on their missions to spray the toxic herbicides throughout the south of Vietnam. After the war, the Americans went home to their country, leaving the storehouse of poisonous chemicals still there. A unit of Vietnamese troops built a wall around the contaminated storehouse to keep people from getting into this dangerous area. The wall could stop human beings from getting in, but not the weather. With each heavy rain, dioxin flooded from the storehouses and air base to the lake and surrounding areas, contaminating everything it touched, including the fish. Then the fish and the water poisoned the people.

Mr. Vu Huu Dang and his family live very close to the lake. When we arrived at his house, he and his wife and son were sitting under the shade of a mango tree. Doctor Le Cao Dai had come here many times, so he was well acquainted with them. Pleased to welcome the doctor and a reporter to their home, Dang's wife, Mrs. Hoa brought tea and tobacco to us in the cool beneath the mango.

Before us sat a family of three: Mr. Dang, Mrs. Hoa, and their son, who was about 20 years old. Mr. Dang's sallow face swelled with edemata; red blistery sores covered his arms and legs, and in other places his skin appeared to be sloughing off. Mrs. Hoa's pale face wore a look of confusion; her eyes were sunken. The son looked emaciated, tired, and very sad. Three people, three parts to the many affected by dioxin.

Mrs. Thuy said: "At the time peace started, in July of 1975, I was carrying my eldest child. Listening to people talk, we all thought the people living in the area around the Americans' chemical weapons might be contaminated, or might give birth to deformed kids. I was really afraid. One day, I went to see the fortuneteller in Phuoc Long and asked him if my future had anything strange in it. After praying and making obeisance to the spirits of his house, the fortuneteller stared intently at my belly. He did not speak or laugh, and when his two eyes seemed stuck to the place they looked at, I began to feel strange, worried for myself. Calmly, I asked, 'What problem must I face?'

"The fortuneteller still didn't say anything. After another minute or two, he jerked up his chin and said, ‘There is a very strange baby in your belly!'

"Hearing that I had a child in my belly filled me with terror and I trembled uncontrollably. I asked under my breath:

"The fortuneteller didn't answer at first, his eyes still locked on my belly. Then he said, 'Your baby's face is ferocious as a demon's.'

"The fortuneteller told me to make ceremonial offerings immediately. 'It might change the situation,' he said. 'With heaven's help, you might give birth to a good child, but without it, the devil you'll give birth to will be very bad.'"

"After that, I was haunted always by the fortuneteller's terrible prediction. When calm returned, I could occasionally convince myself it wasn't true, that it couldn't be true since my husband and I were kindhearted people and a good turn deserves another. A devil-face baby could never get into my belly. Time went by and eventually I became pregnant. With the fortuneteller's warning on my mind, even while writhing on the bed in agony, I kept staring between my legs, desperate to see my child's face. When it appeared, I screamed and fainted."

And now, 30 years later, here was that child, a grown woman. Though Doctor Le Cao Dai had described Nguyen Thi Hoan to me in detail, when we met I still couldn't believe my eyes. I could never have imagined such a strange face. It was uneven, with several layers of skin that piled up to form a thick flap that hung over the left side. There was a hole like a dark eye gaping from her forehead, and under the flap was a semicircular hole like a toothless mouth. If all her life all she had to do was carry this huge face, Hoan could do it, but the flap in and of itself was just the start of the problem. She also had an ulcerated wound that bled and gave her interminable pain all the time.

Mrs. Thuy said: "It's been 30 years she's had a face like this, always with this fluid and pus running out of it like you see today. I apply medicine every day, but still the blood leaks. She lives her life from day to day, but it's been very hard for us, Uncles!"
Posted by kuldeep singh chauhan at 05:21