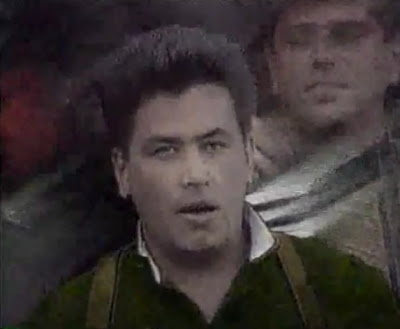 Naming a louche pop singer to the Duma is just the latest in a string of bizarre appointments for Russia’s increasingly brazen ringmaster.

If you're a Russian government official leading a press conference, you know it's a bad sign when your otherwise loyally self-censoring press corps is in such disbelief at your announcement that reporters keep asking if it's true. The nightmare came true on Wednesday for the election chair of the ruling United Russia party, who had to explain -- and explain again -- that yes, pop singer Nikolai Rastorguev was going to be a United Russia deputy in the Russian parliament.

Rastorguev is the close-cropped and slightly bloated frontman of Russian pop group Lyubé, which became popular in perestroika days for its gruff, hoodlum-with-a-heart-of-gold quality (the band members came from the working-class Moscow suburb of Lyubertsy, thus the name), its clever lyrics, and its nonchalance toward authority. For nearly 21 years, the band has performed in army tunics and sung jokey songs like, "Stop Fooling Around, America," a half-serious call for the United States to give back Alaska, the video for which is a random soup of Soviet kitsch with Photoshop graphics. (Did Sarah Palin see that one coming from her window?)

Now riddled with liver and kidney problems, Rastorguev has been drifting into the Kremlin's lucrative embrace for years. In 2002, then-president Vladimir Putin mentioned that Rastorguev was his favorite performer and invited the band for an earnest political discussion at his dacha. Then, in 2006, Rastorguev joined Putin's United Russia party, proclaiming, perceptively, that it was the "the only serious political force in the country." The following year, he joined the United Russia ticket for the parliamentary elections in the southern Stavropol region, mostly as a performer at party rallies. Then, a few weeks ago, a Duma seat opened up and Rastorguev, who in 2008 gave Putin a vial of Lyubé cologne, was asked to step in -- partly, observers say, as a "thank you" for all those rally concerts.

But the craziest part of all is that it has ceased to feel unusual. When Rastorguev takes his seat in a few weeks, left vacant by a parliamentarian sent east to Yekaterinburg, he will join a long list of celebrities who have served for United Russia in the parliament during the Putin era. First, there was the raspy strummer Alexander Rozenbaum, who served briefly and with little distinction, followed by the more active, Barry Manilow-esque Iosif Kobzon. The two singers are gone, but over the last three years Putin has replaced them with a bevy of beauties -- a ballerina, a boxer, two gymnasts, and a speed skater -- in a move that's oddly reminiscent of his buddy Silvio Berlusconi's tactic of naming famous busty women, or outright porn stars, to head up Italian ministries. (Notably, the speed skater is now a vice speaker, and one of the gymnasts is Alina Kabaeva, the rhythmic gymnast rumored to be Putin's mistress who recently gave birth to a son she named Dmitry, a name he shares with the current Russian president.)

Now, with Rastorguev's ascendance, the existence of celebrities in the Duma seems to be creating an insane perpetual-motion machine: Responding to stunned journalists at the Wednesday press conference, the United Russia election chair said, "What sensation? Is it so rare for various athletes and artists to become deputies?" Responding in turn to such circular logic, one political scientist joked that the members of Deep Purple -- another Putin favorite -- might be Russia's next parliamentarians.

It is crazy, yes, but it is also brazen. Padding his parliament with inexperienced celebrities -- celebumentarians? -- is perhaps Putin's most blatant admission that the Duma is little more than a rubber stamp, a gesture at the democracy Russia says it has.

"Don't you understand?" says opposition politician Boris Nemtsov. "United Russia is not a political party. These people are just the hired help. You know, at the king's court, there were jokers and singers and clowns, and the king was their master. Their job is just to raise their hands on command and then put them down again."

In talking about Rastorguev's bizarre appointment, some members of United Russia seemed grudgingly willing to defend the increasingly outlandish party line: "A singer can do government and civil service," United Russia deputy Boris Resnik says. "It doesn't strike me as at all odd."

Others are trying to play a more subtle card. Gleb Pavlovsky, a top Kremlin advisor, was quite honest about the fact that Rastorguev was less than experienced, though, he added, it is "unlikely that they'll demand any extraordinary activity of him. He will be a cultural voice."

Pavlovsky also conceded that, "of course, they" -- athletes and artists -- "give a somewhat non political character to the party, but I don't think it's a big problem."

And, taking the by-now-familiar Kremlin line of invoking Russian exceptionalism as a salve for all wrongs, Pavlovsky maintained that this was simply a phase. "It is not something to be proud of in our political life," he said. "It is our inheritance from the late Soviet period when film directors and academics were political figures. I would prefer more lawyers, but it's a slow process."


Moreover, according to Pavlovsky, naming celebrities to the state Duma was "a correct tactic in forming the United Russia party as the party of the majority, a catchall party. It's quite normal ... there are athletes and artists in the parliament of every country in Europe." Pavlovsky declined to list any examples, but he suggested that including popular figures in party lists was a way to fight chronic public skepticism. "It's totally normal," he says. "People have felt a lot of distrust toward the government since Soviet times, so to attract them, it's important to have leaders of public opinion in the party."

It's a strategy that, paradoxically, seems to be working. On the one hand, according to a recent poll by the Levada polling center, Russians have not really had the wool pulled over their eyes: Only 9 percent of Russians believe that their current form of government can be called "a democracy." (Two years ago, it was 15 percent.) "People see that state bureaucrats are getting more and more power and that the people get less and less; they see the highly personalized rule, the rigged elections," says Levada sociologist Oleg Savelev. Russians, in other words, are not stupid.

United Russia, on the other hand, is smarter. Levada polling -- widely seen as the country's most reliable -- shows that Russians have largely bought into five years of rhetoric of "sovereign democracy," the theory propagated by the Kremlin, and seen as an excuse for creeping authoritarianism, that the Western model of democracy would be inappropriate for Russia. Nearly half of respondents say that Russia needs a form of democracy that is "completely unique, corresponding to the national traditions and specifics of Russia."

And, strangely, in the few years since Putin started granting election-list slots and Duma seats as favors to his favorite celebrities, Pavlovsky's cynical tactics seem to be paying off. (And let's be clear here: In a country where opposition figures are routinely plucked off ballots on absurd technicalities, there can be no question that someone has to be allowed to run.) Russian opinion of the Duma -- inefficient and obstreperous in Boris Yeltsin's days; a rubber stamp now -- has always been low. But, since 2007, it has received a significant boost (relatively), with 13 percent approving of the Duma, up from 9 percent.

Which is also nearly the same spread as in the democracy poll.

Pavlovsky's "leaders of public opinion" appear to be actually overcoming the Russian skepticism toward government, never mind that the government itself is now run, almost literally, by circus performers.

To fix such a brain-scrambling non sequitur, one can only turn to someone like Victor Shenderovich, a keen political satirist whose political comedy puppet show Kukly was yanked off the air in 2002 for needling Putin a bit too hard.

"You know, this is a problem for a professional satirist, when events are funnier than any commentary you can provide," he says. "Any joke would be gratuitous because the events are already a joke."
Posted by kuldeep singh chauhan at 00:08