The new symbol of rupee: a step towards globalisation 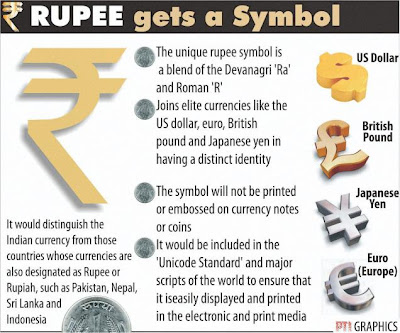 Evoking national spirit and international attention the Indian rupee attained a new avatar in its new symbol. A distinct identity with a blend of the Devanagri ‘Ra' and Roman ‘R', the Indian currency will be joining the elite club of the U.S. dollar, the European euro, the British pound sterling and the Japanese yen.

This would distinguish the Indian currency from its neighbouring countries' — Pakistan, Nepal, Sri Lanka and Indonesia — similarly known rupee or rupiah.

“With this, Indian rupee will join the select club of currencies such as the U.S. dollar, British pound sterling, euro and the Japanese yen that have a clear distinguishing identity.”

The growth story of India is intact and many would be interested in correlating the new symbol with its economic growth and ambition to become an economic super power.

However, the introduction of the new symbol is having a political dimension. While Pranab Mukherjee spoke about ethos of the country in Parliament, it was definitely, on the largest democracy of the world. As compared to other Asian powers, especially China, India's strength lies in its democracy.

This new symbol is also considered as a step towards internationalisation of Indian rupee.

While the U.S. dollar, the British pound, the euro and the Japanese yen are widely traded currencies, Indian rupee is only partially convertible.

Further, majority of world's currencies are also floating. Convertible currencies are defined as currencies that are readily bought, sold and converted without the permission from a central bank or government entity. The Indian rupee is only partially convertible as the central bank controls the international investments flowing in and out of the country.

With a new symbol, the issue of full capital account convertibility would be revived again. However, the recent global financial crisis again proved that India would not be able to take such risks though one may say this as a weakness for the Indian currency in the global arena.

Volatile capital flows have been a central issue during the recent financial crisis, which surfaced around 2007-08, and continue to be so now as the crisis is ebbing. Emerging market economies (EMEs) saw a sudden stop and reversal of capital flows during the crisis as a consequence of global deleveraging.

The recent crisis has clearly been a turning point in the world view on capital controls.

The Asian crisis of the mid-90s demonstrated the risk of instability inherent in a fully open capital account. Even so, the intellectual orthodoxy continued to denounce controls on capital flows as being inefficient and ineffective. The recent crisis saw, across emerging economies, a rough correlation between the extent of openness of the capital account and the extent of adverse impact of the crisis. Surely, said Dr. Subbarao “this should not be read as a denouncement of open capital account, but a powerful demonstration of the tenet that premature opening hurts more than it helps.”

Notably, the International Monetary Fund (IMF) published a policy note in February this year that reversed its long held orthodoxy. The note has referred to certain ‘circumstances in which capital controls can be a legitimate component of the policy response to surges in capital flows'.

Now that there is agreement that controls can be ‘desirable and effective' in managing capital flows in select circumstances. The Indian rupee is likely to remain a partially convertible currency, at least in the near future as Dr. Subbarao put it: How emerging market economies manage the impossible trinity — the impossibility of having an open capital account, a fixed exchange rate and independent monetary policy — is going to have an impact on their prospects for growth, price stability and financial stability.

Historically under the British Raj Indian rupee was fully convertible. While many starved and famines hit the country, a small section was buying palaces and other assets in Europe.
Posted by kuldeep singh chauhan at 23:07