Does China Have Taiwan in a Strait Jacket? 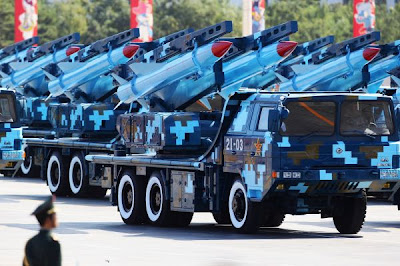 With China-Taiwan relations nowhere near to being resolved, China's brand-new ballistic missiles are looking scarier than ever.

Six decades after the People's Republic of China was founded in the wake of Mao Zedong's victory over the nationalists, relations between the mainland and Taiwan are less contentious now than they have been in years. The May 2008 inauguration of Ma Ying-jeou as Taiwan's president put an end to Chen Shui-bian's tumultuous eight years in office, precipitating a thaw in what had been frosty relations between Taipei and Beijing.

But observers shouldn't assume that the ostensible rapprochement means that all problems are solved. As long as the stalemate at the heart of the problem across the Taiwan Strait -- how the island's status will ultimately be determined -- remains unresolved, China and Taiwan's relationship will remain unresolved as well. And nothing so far suggests that this impasse is any nearer to being settled today than when Chen was in power. With the strait continuing to be a potential flashpoint for crisis, then, maintaining a military balance between China and Taiwan thus remains vital for stability. But over the last decade, this balance has been tilting in Beijing's favor -- a development that could have serious implications not just for the China-Taiwan relationship, but for all of China's neighbors in the region, including the United States.

A key part of China's arsenal is a large force of conventionally armed short-range ballistic missiles (SRBMs). The U.S. Department of Defense reported in this year's assessment of China's military that Beijing had deployed between 1,050 and 1,150 of these missiles and is adding to the stockpile at the rate of about 100 per year. The DoD report also says that the newer missiles offer "greater ranges, improved accuracy, and a wider variety of conventional payloads, including unitary and submunition warheads." These improvements change China's SRBMs from theoretical into actual threats.

A recent report that I coauthored with my RAND colleagues closely examines how China's new SRBMs could be used against Taiwan's air bases, assessing how many missiles of a given accuracy, carrying appropriate submunition warheads, would be needed to temporarily close every runway at each of Taiwan's 10 primary fighter bases.

Accuracy is measured by a missile's circular error probable (CEP), which is the radius of a circle around the target where 50 percent of the missiles fired will fall. Missiles with CEPs of 700-1,000ft (200-300m), accuracies characteristic of China's older SRBMs, are practically useless for attacking runways; they simply aren't sufficiently precise.

With smaller CEPs, however, such as the ones China is believed to be stockpiling, the job starts looking doable. With an accuracy of 130ft (40m), 200 SRBMs are needed. With very accurate missiles -- with CEPs of 16ft (5m) -- only 60 are required.

We performed a similar analysis to estimate how many submunition-equipped SRBMs would be required to have a 90 percent chance of destroying or damaging almost every aircraft not already in the air or parked in a hardened aircraft shelter. Again, with sufficiently accurate missiles and appropriate warheads, only about 30 to 40 SRBMs would be needed to accomplish this at all Taiwanese fighter bases.

In all, just 90 to 240 sufficiently accurate, submunition-equipped SRBMs would give China a better than fair shot at shutting down Taiwan's fighter force in a matter of minutes. If Taiwan's surface-to-air defenses can also be suppressed, a window would open through which the Chinese air force could fly perhaps hundreds of aircraft delivering precision-guided munitions on hardened air shelters and other targets too small or too hardened to be at risk from SRBMs. Blows like this could knock Taiwan's air force mostly out of the war in the opening hours of a conflict. U.S. bases that are relatively close to China, like those on Okinawa, will increasingly face a similar threat from China's modern missiles.

Chinese air superiority would allow Beijing to attack military and civilian targets on the island while suffering acceptable losses and would be vital for any serious cross-strait invasion attempt. Under these new circumstances, countering these dangers engendered by Chinese control of the air -- rather than dueling with them for control -- is a key wartime task for Taiwan.

Taiwan can take steps to address some of these problems, including further hardening measures, improved runway repair capabilities, decoys, and dispersal, along with better theater-missile defense capabilities. As China fields increasing numbers of more capable SRBMs, however, it will prove increasingly difficult for Taiwan to protect its military and civilian infrastructures from heavy damage, even with American help. Despite the calm political climate currently prevailing across the Taiwan Strait, this is a sobering finding.
Posted by kuldeep singh chauhan at 22:24