India to get two more AWACS, other radars to make airspace impregnable 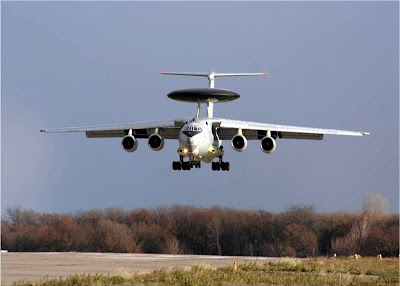 India will go in for two more AWACS (airborne warning and control systems), the "formidable eyes in the sky", after the last of the three Israeli Phalcons already ordered is inducted in December.

IAF is also on course to induct a wide array of radars, from 19 LLTRs (low-level transportable radars) and four MPRs (medium-power radars) to four Aerostat and 30 indigenous medium-range Rohini systems, towards making Indian airspace as impregnable as possible.

All this is in tune with the crucial plan underway to set up five nodes of IACCS (integrated air command and control system) across the country, with the first one coming up in the western sector facing Pakistan, to plug existing gaps in the country's air defence coverage.

Seamless data transfer from civilian and military radars as well as AWACS, all networked under IACCS, will make it possible to get the "air situation picture" at a central place in realtime. This will ensure that swift counter-measures can be mounted to thwart aerial threats soon after they are detected.

"We have already moved the case for two more AWACS," IAF chief Air Chief Marshal P V Naik told TOI. These will be in addition to the three Phalcon AWACS already contracted under the $1.1 billion project finalised with Israel and Russia in March 2004.

The complex project, under which the Israeli 360-degree Phalcon early-warning radar and communication suites were mounted on Russian IL-76 heavy-lift military aircraft was hit by several technical delays.

Consequently, the first AWACS arrived in India only in May 2009 and the second in March 2010. The third is slated to be inducted by this year-end.

"Phalcon AWACS are tremendous force-multipliers. We are having an excellent experience with them. They will get their final operational clearance by October-November," said ACM Naik.

IAF's capabilities to detect and track troop build-ups or aircraft movements even deep inside enemy territory, much further than ground-based radars, have certainly registered a quantum jump with AWACS.

Apart from detection of incoming cruise missiles and aircraft from over 400-km away in all-weather conditions, AWACS are also used to direct air defence fighters during combat operations against enemy jets.

Moreover, IAF and Navy are also on course to induct nine more Aerostat radars after getting two Israeli EL/M-2083 radars in 2004-2005 for $145 million. Similarly, IAF is slated to begin inducting 19 LLTRs from October 2011 onwards, while deliveries of light-weight LLTRs will commence soon. Four MPRs are expected to be delivered by December 2011.

Incidentally, India is also pursuing a Rs 1,800 crore mini-AWACS project indigenously. Under this, the indigenous AEW&C systems developed by DRDO will be mounted on three Embraer-145 jets, being obtained from Brazil for $210 million.
Posted by kuldeep singh chauhan at 23:13