What Do You Learn at Terrorist Training Camp? 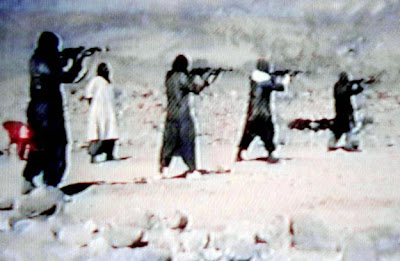 Some marksmanship, maybe bomb-making, and a whole lot of indoctrination.

Faisal Shahzad, the suspect in the failed plot to bomb New York City's Times Square, has told U.S. investigators that he received bomb-making training at a camp in Pakistan's Waziristan region. Given the botched, even amateurish nature of Shahzad's attempt -- he forgot to take the keys to his getaway car, for instance -- many observers are now asking: What exactly does one learn at a terrorist training camp?

First of all, today's terrorist training camps are not what they used to be. Sprawling al Qaeda camps complete with such amenities as firing ranges, like Tarnak Farms near Kandahar, Afghanistan, where Osama bin Laden is believed to have plotted the 9/11 attacks, are largely a thing of the past.

Today, al Qaeda outsources most of its training to Pakistani outfits like Tehrik-e-Taliban Pakistan (TTP) and Lashkar-e-Taiba (LET), the group believed to be behind the 2008 Mumbai attacks. The camps these groups run are often small, just one or two buildings, and temporary -- such groups stay on the move to avoid detection by satellite or intelligence agents. These groups are believed to be increasingly sharing resources when it comes to training. According to some estimates, there are about 40 militant training camps around Pakistan.

Enrolling in a militant training program is not easy, particularly for foreigners. Groups like the TTP, whose leadership has been decimated by U.S. drone strikes in recent months, are extremely wary of outsiders, believing that anyone who turns up looking for training could be a spy.

Five young American men learned this the hard way last December when they were picked up by Pakistani authorities after being rejected by several militant groups. However, wannabe jihadists of Pakistani descent, like Shahzad, can improve their odds of enrolling by having a relative or friend vouch for them. Insurgent groups with Western connections, like the so-called "German Taliban," are also believed to vet potential recruits from abroad.

Assuming you meet the entrance requirements -- Pakistani security officials say camps train only about 20 recruits at a time -- the curriculum can vary.

A typical day will begin with morning prayers, followed by a sermon on the significance of jihad. Physical drills and operational training take place during the day. Instructors are typically veteran jihadists, although in groups like LET or the Kashmiri nationalist organization Jaish-e-Mohammed, former members of Pakistan's intelligence services are also believed to have been on the faculty.

Evenings are for indoctrination. It might seem strange that students enrolled in militant training would need further convincing, but local recruits are reportedly often cajoled or forced into attending by their families or madrasas. Recruits are shown hours upon hours of video depicting Western atrocities against Muslims to dispel any doubts about the cause of jihad.

Typically recruits are given lessons on how to handle small arms such as AK-47s and PK machine guns as well as rocket-propelled grenades, tactics for attacking military convoys, and instructions for planting mines. Pre-2001 al Qaeda camps also trained their recruits on sniper rifles and mortars, but this is rarer today. Students found to be quicker learners are given more specialized training in skills such as bomb-making or operational security.

Relatively few foreigners have gone through the camps, and groups like the TTP rarely attack targets outside Pakistan or Afghanistan, so it's difficult to know what kind of specialized training Shahzad might have received or why he seemed so unprepared for his mission. One theory has it that Shahzad was trying to prove his loyalty in order to gain access to the movement and receive more advanced operational training.

In any evident, despite ample evidence of its involvement, the TTP doesn't seem too anxious to claim the would-be bomber as one of its alumni.
Posted by kuldeep singh chauhan at 05:13