How Not to Run an Empire 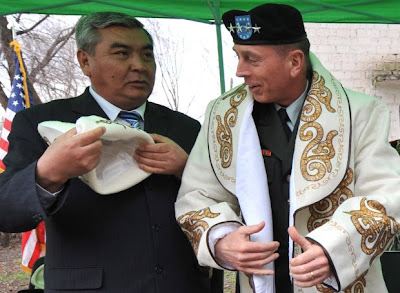 This week's uprising in Kyrgyzstan didn't appear out of nowhere. For the last several years, many of this Central Asian country's people have felt betrayed by a government that came to power promising democracy and reform, but in their eyes delivered repression and nepotism instead. A confrontation had been brewing for months, with arrests of opposition leaders and restrictions on the media prompting public protests, which escalated when the government hiked utility prices. Meanwhile, the government's heavy-handed police methods have, according to some analysts, helped radicalize a growing part of the Muslim population in southern Kyrgyzstan.

If you raised these problems with U.S. government officials in the last year or so, they would typically say something like: "Yes, all of that is true, and we're very concerned. But [sigh], there are other equities." In Washington nowadays, "equities" is bureaucratic parlance for "the Pentagon has a stake in this issue." In the case of Kyrgyzstan and Central Asia, it means that the U.S. government's chief concern is keeping the region's roads, airfields, and airspace open for supplies moving to Afghanistan.

U.S. policymakers increasingly view Central Asia as a transit point to somewhere else. It is a region through which oil and natural gas flow to Europe, reducing U.S. allies' dependence on Russian energy supplies. It is a region through which fuel, food, and spare parts flow to surging U.S. and NATO forces in Afghanistan, reducing their dependence on a precarious Pakistani supply route. Officials and policy experts even have a new name for this region that captures its status as a logistical intermediary, rather than a set of distinct countries that matter in their own right: They call it the "Northern Distribution Network."

One hub in the "network" is Uzbekistan. Ruled for two decades by the government of Islam Karimov, Uzbekistan is a place where dissidents are routinely imprisoned and tortured; a few weeks ago, the government convicted a photographer for "insulting the Uzbek people" because she took pictures showing poor people in the country. Brutal repression in Uzbekistan's Fergana Valley -- including the 2005 massacre of hundreds of protesters in the city of Andijan -- has shut all avenues for peaceful dissent in Central Asia's most densely populated subregion and could create opportunities for radical groups to gain support. Five years ago, Uzbekistan expelled U.S. forces from an air base in the country, but continues to allow U.S. supplies to pass through. So the Pentagon has pushed for an easing of congressionally mandated sanctions that forbid direct U.S. aid to the Uzbek government.

Another hub is Kazakhstan. Unlike Kyrgyzstan, Kazakhstan has energy wealth and a relatively stable government. But that government, led by President Nursultan Nazarbayev, also maintains an atmosphere of quiet repression, stifling opposition media and manipulating the political process. Nazarbayev has rebuffed repeated requests from U.S. President Barack Obama's administration to accelerate political reforms and release from prison the country's leading human rights defender, Yevgeny Zhovtis. Yet Nazarbayev will be one of only a few leaders attending next week's nuclear security summit to get a one-on-one meeting with Obama.
Posted by kuldeep singh chauhan at 03:30