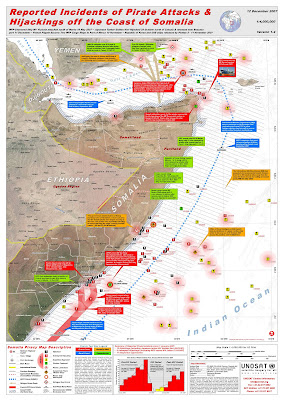 Last week, a group of investigators dispatched by the Security Council to Somalia released an exhaustive, 100 plus page report on arms trafficking, aid diversion, and other criminal activities in Somalia. So far, much of the press around the report has focused on allegations that World Food Program aid had been diverted to suspected militants. The report also provides evidence that Eritrea has been supporting Somali militants, raising the prospect that Eritrea will once again come under international condemnation.

I'll have much more to write about this report soon. In the meantime, I found this short explanation of the pirates' business model, tucked away in the report's annex, to be fascinating.

A basic piracy operation requires a minimum eight to twelve militia prepared to stay at sea for extended periods of time, in the hopes of hijacking a passing vessel. Each team requires a minimum of two attack skiffs, weapons, equipment, provisions, fuel and preferably a supply boat. The costs of the operation are usually borne by investors, some of whom may also be pirates.

To be eligible for employment as a pirate, a volunteer should already possess a firearm for use in the operation. For this ‘contribution’, he receives a ‘class A’ share of any profit. Pirates who provide a skiff or a heavier firearm, like an RPG or a general purpose machine gun, may be entitled to an additional A-share. The first pirate to board a vessel may also be entitled to an extra A-share.

At least 12 other volunteers are recruited as militiamen to provide protection on land of a ship is hijacked, In addition, each member of the pirate team may bring a partner or relative to be part of this land-based force. Militiamen must possess their own weapon, and receive a ‘class B’ share — usually a fixed amount equivalent to approximately US$15,000.

If a ship is successfully hijacked and brought to anchor, the pirates and the militiamen require food, drink, qaad, fresh clothes, cell phones, air time, etc. The captured crew must also be cared for. In most cases, these services are provided by one or more suppliers, who advance the costs in anticipation of reimbursement, with a significant margin of profit, when ransom is eventually paid.

When ransom is received, fixed costs are the first to be paid out. These are typically:

The remaining sum — the profit — is divided between class-A shareholders.

Wonder if they teach that at Wharton?

An Indian navy warship has destroyed a suspected Somali pirate vessel after it came under attack in the Gulf of Aden.

INS Tabar sank the pirate "mother ship" after it failed to stop for investigation and opened fire instead, an Indian navy statement said.

There has been a surge in piracy incidents off the coast of Somalia.

The latest attack came days after the Saudi-owned Sirius Star supertanker and its 25 crew were seized by pirates and anchored off the Somali coast.

Vela International, operators of the Sirius Star, told the BBC no demands had yet been received from the pirates. The company also said all the crew were safe.

The biggest tanker ever hijacked, Sirius Star is carrying a cargo of two million barrels of oil - a quarter of Saudi Arabia's daily output - worth more than $100m (£67m).
Analysts say the pattern of other hijackings suggests a ransom request is likely to follow. Given the value of the tanker and its cargo, that is expected to be a sizeable demand.

Two of the captive crew are British. The UK Foreign Secretary, David Miliband, said the Royal Navy was co-ordinating the European response to the incident.

"The problem of piracy around Somalia is a grave danger to the stability in the region," he told the BBC.

Somalia has not had a functioning national government since 1991 and has suffered continuing civil strife.

India is among several countries already patrolling the Gulf of Aden, one of the world's busiest shipping lanes which connects the Red Sea and the Indian Ocean.

The Indian navy said the Tabar spotted the pirate vessel while patrolling 285 nautical miles (528km) south-west of Salalah in Oman on Tuesday evening.

The navy said the pirates on board were armed with guns and rocket propelled grenade launchers.

When it demanded the vessel stop for investigation, the pirate ship responded by threatening to "blow up the naval warship if it closed on her", the statement said.

Pirates then fired on the Tabar, and the Indians say they retaliated and that there was an explosion on the pirate vessel, which sank.

"Fire broke out on the vessel and explosions were heard, possibly due to exploding ammunition that was stored in the vessel," the Indian navy said.

Some of the pirates tried to escape on two speedboats. The Indian sailors gave chase but one boat was later found abandoned, while a second boat escaped.

INS Tabar has been patrolling the Gulf of Aden since 23 October, and has escorted 35 ships safely through the "pirate-infested waters", the statement said.


On Tuesday, a cargo ship and a fishing vessel became the latest to join more than 90 vessels attacked by the pirates this year.

The first vessel, a 25-crew cargo vessel transporting wheat to Iran, was attacked in the Gulf of Aden, while contact was lost with the crew of 12 on the fishing boat.

Piracy off the coast of East Africa and the Gulf of Aden - an area of more than 1m sq miles (2.6m sq km) - is estimated to have cost up to $30m in ransoms this year, a UK think tank has said.

The hijackings account for one-third of all global piracy incidents this year and the situation is getting out of control, according to the International Maritime Bureau.

The pirates who seized the Sirius Star are a sophisticated group with contacts in Dubai and neighbouring countries, says the BBC Somali Service's Yusuf Garaad.

Much of their ransom money from previous hijackings has been used to buy new boats and weapons as well as develop a network across the Horn of Africa, he adds.

Shipping companies are now weighing up the risks of using the short-cut route to Europe via the Suez canal.

However, travelling around South Africa's Cape of Good Hope would add several weeks to average journey times and substantially increase the cost of goods for consumers.
Posted by kuldeep singh chauhan at 23:32