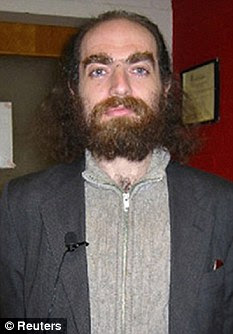 A Russian mathematician is rejecting a $1million (£666,000) prize for solving one of the most challenging problems because he considers it unfair.

Said to be the world's cleverest man, Dr Grigory Perelman, 44, lives as a recluse in a bare cockroach-infested flat in St Petersburg.
He was awarded the $1million in March by the U.S. Clay Mathematics Institute for solving the Poincare Conjecture, which baffled mathematicians for a century. Dr Perelman posted his solution on the internet.
But he told the institute, based in Cambridge, Massachusetts, that he was turning down the prize.

Perelman was quoted by Interfax as saying he believes his contribution in proving the Poincare conjecture was no greater than that of U.S. mathematician Richard Hamilton, who first suggested a program for the solution.

The Poincare conjecture deals with shapes that exist in four or more dimensions.
After the prize was announced in March, he said: 'I have all I want.'
Four years ago, the maths genius failed to turn up to receive his prestigious Fields Medal from the International Mathematical Union for solving the problem.

At the time he stated: 'I'm not interested in money or fame. I don't want to be on display like an animal in a zoo.

'I'm not a hero of mathematics. I'm not even that successful, that is why I don't want to have everybody looking at me.'
Neighbour Vera Petrovna said: 'I was once in his flat and I was astounded. He only has a table, a stool and a bed with a dirty mattress which was left by previous owners - alcoholics who sold the flat to him.

'We are trying to get rid of cockroaches in our block, but they hide in his flat.'
It was in 2002 that Perelman, then a researcher at the Steklov Institute of Mathematics in St. Petersburg, began posting papers online suggesting he had solved the Poincare Conjecture, one of seven major mathematical puzzles for which the Clay Institute is offering $1 million each.

Rigorous tests proved he was correct.

The topological conundrum essentially states that any three-dimensional space without holes in it is equivalent to a stretched sphere.
The puzzle was more than 100 years old when Perelman solved it - and could help determine the shape of the universe.

After 2003 Perelman gave up his job at the Steklov Institute. Friends have been reported as saying he has resigned from mathematics altogether - finding the subject too painful to discuss.