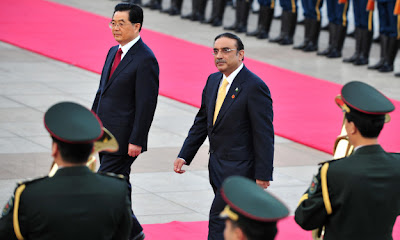 China is about to break important international rules designed to prevent nuclear proliferation. Can Beijing be stopped?

In the coming weeks, China is expected to announce that it intends to export two nuclear-power reactors to Pakistan. The move would breach international protocol about the trade of nuclear equipment and material. Once the deal is officially confirmed, the spotlight won't be on either Beijing or Islamabad; it will be on Washington, which concluded a watershed nuclear agreement with India in 2008. That deal is the precedent that has opened the door for China -- creating an awkward test for a U.S. administration greatly concerned about the risks of nuclear proliferation.

China's announcement will overstep the guidelines of the 46-country Nuclear Suppliers Group (NSG), which bar nuclear commerce between Nuclear Non-Proliferation Treaty (NPT) members like China and nonmember states like Pakistan. It will leave U.S. President Barack Obama with two options: He can either oppose the transaction and request that China leave the NSG, or grudgingly accept the Chinese exports. As of last week, when U.S. Secretary of State Hillary Clinton met with Chinese leaders in Beijing for the three-day U.S.-China Strategic and Economic Dialogue, the United States was strongly leaning toward the latter.

If the White House does choose to grin and bear the China-Pakistan deal, it will have compelling reasons for doing so. The United States has a lot on its plate with China right now. It wants Chinese help on U.N. Security Council sanctions against Iran, a greater Chinese effort to rein in North Korea, and a significant revaluation of China's currency vis-à-vis the U.S. dollar. But more importantly, the United States made its own NSG rule-suspending nuclear deal with India in 2008. Beijing could have blocked the NSG exemption for India, but accommodated the pressure of the United States and its allies on this issue. Now, the bill is coming due as Islamabad demands equal treatment. It would be reasonable for China to expect reciprocity from the United States in the NSG, given that it was Washington that started changing the rules.

Indeed, since joining the group in 2004, China has played according to the NSG's voluntary rules, despite a long tradition of nuclear collaboration with Pakistan. Upon joining, Beijing informed the group of its existing civil nuclear agreement with Pakistan, which Beijing said committed China to build the Chashma-2 power reactor now scheduled to be finished next year. Since 2004, Pakistan has enlisted China to supply it with two additional power reactors, Chashma-3 and -4. Beijing hasn't obliged, but now that U.S., French, Japanese, and Russian firms are poised to sell nuclear equipment to India, China is finally prepared to press the issue.

A number of NPT countries are watching all this with alarm. At last month's NPT Review Conference, they referred to the U.S.-India deal as a dangerous precedent. States that export nuclear equipment, they worried, would feel emboldened to brush aside rules meant to reward NPT membership with nuclear-trade privileges. The U.S.-India deal is also still lamented as a missed opportunity; had India agreed to sign the Comprehensive Nuclear-Test-Ban Treaty as a condition of the NSG exemption, for example, it would have taken a major step to de-escalate nuclear competition in South Asia. (It also would have blunted much of the resentment the deal and exemption touched off among many of the NPT's nonnuclear-weapon states.)

Instead, here's where we are now: China is prepared to take advantage of the opening created by the United States and India to move forward on its nuclear deal with Pakistan. Because the NSG guidelines are voluntary and not legally binding, critical group members cannot prevent the transaction. Still, China knows that it faces international criticism if it goes through with the export to Pakistan, so the timing of its announcement is crucial. China chose not to formally announce its plans before the NPT Review Conference closed last month. Instead, the matter might be raised during an annual NSG plenary meeting to be held in New Zealand in late June.

If that happens and China looks set to move forward with the trade, all is not lost. Rather than remaining formally silent or issuing a paper démarche expressing regret about China's move, the United States could call upon China and Pakistan to provide a significant nonproliferation benefit as part of the transaction -- of the sort the U.S.-India deal failed to include. For example, both countries could together open the road to negotiation of a Fissile Material Cutoff Treaty, which would halt production of highly enriched uranium and plutonium for weapons worldwide. Right now, Pakistan is blocking negotiations at the U.N. Conference on Disarmament in Geneva, citing the U.S.-India deal and the NSG exemption for India. Many NSG states think that China -- the only one of the NPT's five nuclear-weapons states never to have declared a moratorium on producing fissile material for nuclear weapons -- stands behind Pakistan in holding up the negotiations.

A more modest but practicable step would be for China and Pakistan to cooperate in improving the security of the latter's nuclear installations, materials, and other assets. Doing so would force China to engage more directly in solving nonproliferation problems in South Asia at a time when Islamabad has become resentful and suspicious of Washington's efforts to secure Pakistan's nuclear infrastructure. This should not trouble the United States: Historically, China has a far more trusting relationship with Pakistan in the nuclear area, and since the late 1980s, Washington and Beijing have worked through bilateral nonproliferation issues concerning Chinese nuclear ties to Pakistan and have brought into force a bilateral nuclear-cooperation agreement on the basis of which U.S. industry is now deeply involved in China's civilian nuclear-energy program.

If the NSG countries press for such nuclear security and nonproliferation action, however, China may well push back, for example by claiming that India would surely object to its greater involvement in Pakistan's nuclear program. But such regional sensitivities didn't stop India from forging a nuclear alliance with the United States in 2008 despite its knowledge that Washington had done the nuclear deal as part of a strategic realignment aimed at challenging Beijing.

There will also be critics in the United States. Surely, many will argue, China will fall short in improving Pakistan's nuclear security, given the lack of success had by the United States, Japan, Russia, and South Korea in convincing Chinese leaders to pressure North Korea to abandon its nuclear-weapons program. But China didn't meet those expectations for a specific reason: its strategic interest in keeping the peninsula divided and its border with the North at ease. Boosting nuclear security in Pakistan, however, would clearly and directly improve China's own security. China shares the U.S. goal of eliminating terrorism. Loose nukes in Pakistan could end up in the hands of Chinese irredentists and separatists.

So, if China refuses to halt the exports to Pakistan, should Washington push to kick Beijing out of the NSG? No. At a time when the country has become the world's biggest nuclear beehive, a China outside the suppliers group would be free to ignore the concerns of the United States and other nuclear exporters.

Sixty percent of the reactors under construction in the world today are in China. Chinese industry is investing billions of dollars to make equipment for these and future units, and then find new export markets, including in developing countries. U.S. regulators have already warned their Chinese counterparts that without China's cooperation, unfettered exports of substandard equipment made in China could imperil the safety of the world's nuclear installations. Outside the NSG, China might in the future not be restrained from exporting sensitive technology if the country establishes itself as a major hub for reprocessing and plutonium-fuels production. With China outside the NSG, the United States and other NSG states would find it harder to get Beijing to strictly implement nuclear export controls. In the worst case, a China adrift from the global nuclear-trade regime could become the future center of a nuclear black market.

But keeping China in the NSG doesn't mean letting Beijing off the hook. NSG members should push hard to ensure that significant nonproliferation benefits accrue from the China-Pakistan deal. Simply acquiescing would seal the group's lack of credibility as the world's nuclear-trade gatekeeper. Firm resolve by the United States and other NSG states, on the other hand, would alert China that it will have to think about more than just its commercial interests in exporting nuclear equipment.
Posted by kuldeep singh chauhan at 04:35