Why India Is No Villain 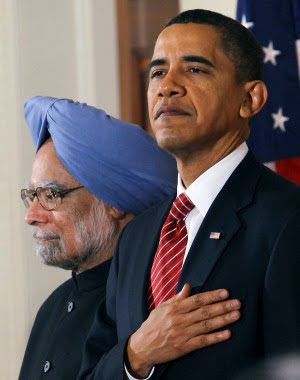 According to the Financial Times' Lucy Kellaway, "Elephant in the Room" was the most popular cliché to appear in major newspapers and journals in 2009. It is perhaps appropriate then that Barbara Crossette's latest diatribe against India appeared in Foreign Policy under that headline. Although it claims to show that India causes "the most global consternation" and "gives global governance the biggest headache," it is merely a series of rants and newsroom clichés selected entirely arbitrarily to support the author's prejudice.

Listing India's alleged failings, Crossette makes the unfathomable assertion that it is India that causes the most consternation and the biggest headache for the world -- more than Afghanistan, Iran, Venezuela, North Korea, Pakistan, and China. Without an attempt to compare the failings across countries (And why only these countries? Why leave out the West and the rest?), it is logically impossible to arrive at the conclusion that one of them is the biggest culprit. But once you trade logic for hyperbole, you can fit just about any animal you like into the room. For Crossette, it is the pachyderm.

Consider these facts instead: The only country to have militarily intervened to halt an ongoing genocide is India, which it did in East Pakistan (Bangladesh) in 1971. After the December 2004 tsunami, it was India's navy that was the first international responder, deploying within 24 hours and delivering humanitarian assistance to Sri Lanka, Indonesia, and the Maldives. It subsequently coordinated operations with the United States, Japan, and Australia. India has been involved in U.N. peacekeeping from the very beginning and remains one of the biggest troop contributors to this day, often putting its soldiers in danger in conflicts that have nothing to do with national interests. Indian naval ships are also involved in maritime security operations from Somalia to the Strait of Malacca. Even this partial list is enough to prove that India is not, as Crossette believes, "a country of outsize ambition but anemic influence."

Let's take a closer look at Crossette's rap sheet. First, she agrees with a quote from an article that appeared in the Bulletin of the Atomic Scientists, a journal that advocates arms control (hardly a neutral source), arguing that India's refusals to sign the Nuclear Non-Proliferation Treaty and the Comprehensive Test Ban Treaty make it "comparable to other defiant nuclear states [and] will undoubtedly contribute to a deteriorating security environment in Asia." She doesn't explain how, because she would be hard-pressed to prove that India's "contribution" is comparable to that of China, which helped put the bomb in the hands of the likes of Pakistan, or North Korea, which brazenly violated the treaty it signed. Actions matter more than signatures.

Second, on the Doha round of trade negotiations, Crossette blames India for single-handedly foiling a deal that "nobody loved, but one that would have benefited developing countries most." Does she really know better than the developing countries themselves? It seems odd that they would not love a deal that "would have benefited [them] most." It is just as presumptuous and illogical to blame the failure of Doha on India alone. Gideon Rachman, for instance, argues that "the Doha round ultimately broke down because of a stand-off between the United States, India, China and the European Union over agricultural trade." Turns out it takes more than one hand to wreck a multilateral deal.

It is on the third point -- climate change -- that Crossette's proclivity for being selective with facts stands out most. She mentions the Indian environment minister's refusal to agree to binding carbon emission targets five months before the Copenhagen talks, but ignores his statement in Parliament five days before the negotiations pledging 20 to 25 percent carbon emission intensity cuts from the 2005 levels by 2020. Nonbinding yes, but nevertheless a serious commitment. And no country's commitments at Copenhagen were binding. She also ignores that in the end, the Copenhagen "deal" came about in part due to India's bridging of the differences between the United States and China.

Fourth, on the basis of one data point -- the scandal over a pay increase to Paul Wolfowitz's girlfriend that precipitated his resignation as president of the World Bank -- Crossette alleges that India "attacks individuals." Wolfowitz, she says, was ousted "not because his relationship with a female official caused a public furor, but because he had turned his attention to Indian corruption and fraud in the diversion of bank funds." It is undeniable that there is corruption in India, but Crossette glosses over the fact that in the interview she quotes, Steve Berkman alleges that World Bank officials were involved in it too. What the latter actually said, as paraphrased by a journalist for Rediff India Abroad, is that "the international bureaucrats who run the Bank ... are the ones who conspired to nail Wolfowitz using the mini-scandal with his girlfriend to call for his ouster." Where does that leave Crossette's argument?

Fifth, Crossette claims that India "regularly refuses visas for international rights advocates," a failing that she supposes occurs because such advocates are critical of the government. Granting that there is a case for India to be more liberal in its visa regime, the country does not lack robust, committed, and vocal human rights activists. Tune in to any Indian television channel. On the other hand, the U.N. Human Rights Council is not exactly a shining example of how the international community protects human rights. Domestic activism and the liberal democratic institutions that allow it are perhaps far more effective in safeguarding human rights.

Ultimately, Crossette's suggestion that India presents a "headache" for global governance is a manifestation of an outdated mindset. It ignores the growing convergence of interests between India and the United States on the biggest challenges of this century: from establishing a liberal, democratic order to managing the rise of China to containing jihadi terrorism to addressing climate change and a host of other challenges. For those worried about rising elephants, make room if you don't want to be squeezed.
Posted by kuldeep singh chauhan at 03:48