Hungary: We're the next Greece... really we are 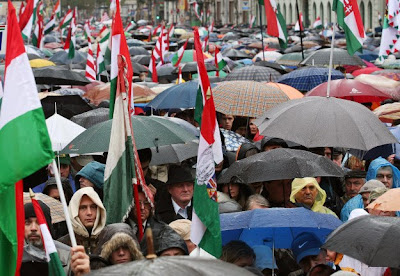 As most of the attention has focused on Europe's PIIGS economies, debt-laden Hungary has, for a few weeks now, been the dark-horse candidate for the next European economy to collapse. This week, the country's new government seems to have been doing everything in its power to reinforce that view:

On Thursday, Lajos Kosa, deputy chairman of the governing Fidesz party, said Hungary was facing a Greece-like financial meltdown. And former Fidesz finance minister Mihaly Varga said the deficit could reach 7-7.5 percent of GDP, about twice as much as planned for 2010 by the previous government.

While Hungary isn't part of the euro, the default fears have weighed on on the euro, which fell to a four-year low of $1.20 today.

The Prime Minister's spokesman described Kosa's characterization as "no exaggeration," though added, not particularly convincingly that ""The government is ready to avoid the Greek path."

The thing is, the actual situation in Hungary doesn't seem quite as dire as the government's gloomy assessment:

Some analysts said the politicians' statements seemed exaggerated, as Hungary's public debt of 78 percent of GDP was high but well below Greek levels.

"Any comparison with the situation in Greece is a little misplaced," Capital Economic's Shearing said, noting that Hungary's short-term debts, those which needed to be repaid to foreign creditors within the next year, equaled just 2.4 percent of GDP.

Is it possible that that the Hungarian government is trying to make the economy sound worse that it is? They would certainly have the incentive. Promising tax cuts, Fidesz won parliamentary elections in a landslide in April, unseating a Socialist governing that had instituted painful austerity measures in order to restore investor confidence.

Market observers are struggling with trying to determine the extent to which the announcements may be a result of political manuevering to back away from campaign pledges to reduce taxes all the way to concerns that there may be a similar credibility gap to Greece regarding past budget numbers.

It's certainly not out of the question that the Socialists were engaging in some creative accounting. Concealing the true state of the economy is becoming something of a tradition in Hungarian politics. In 2006, former Socialist Prime Minsiter Ferenc Gyurcsany was caght on tape telling members of his party that he had concealed the true state of the economy in order to win an election, saying, "Evidently, we lied throughout the last year-and-a-half, two years. It was totally clear that what we are saying is not true."

A recent Pew survey found that an astounding 77 percent of Hungarians describe themselves as "not satisfied" with democracy. That number's becoming a little easier to understand.
Posted by kuldeep singh chauhan at 04:45