Towards an Arms Trade Treaty 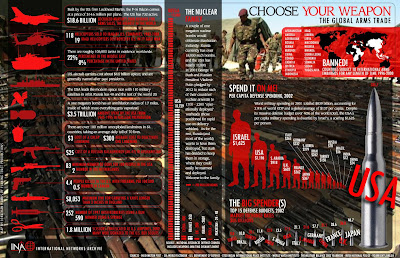 More than 740,000 people are killed as a result of armed violence every year. Many others are assaulted, forcibly displaced or otherwise left with lasting psychological and physical injuries. Through these and other consequences, armed violence generates an estimated ‘global cost of insecurity’ of 400bn USD per annum. Supporters of an Arms Trade Treaty (ATT) seek to reduce the burden of armed violence through negotiating a global, legally binding instrument to regulate the trade in conventional arms. In December of last year, 151 UN Member States voted in support of convening a United Nations Conference on the Arms Trade Treaty in 2012. These States formally recognised:

that the absence of commonly agreed international standards for the transfer of conventional arms…is a contributory factor to armed conflict, the displacement of people, organized crime and terrorism, thereby undermining peace, reconciliation, safety, security, stability and sustainable social and economic development

An ATT would go far beyond existing instruments in regulating the arms trade: it would be global in reach and legally binding in force. Essentially, an ATT would regulate the legal trade in conventional arms with the aim of making it more responsible. More specifically, it would ‘establish common international standards for the import, export and transfer of conventional arms’.5 States would likely be required to assess applications for arms export licences against criteria specified by the Treaty, which would largely be drawn from existing obligations under international law. Applying the principles of the UN Charter, human rights treaties and customary international law to arms transfer decisions would be at the core of an ATT.

The Trade in Conventional Arms

The trade in conventional arms is conspicuously under-regulated. International regulatory efforts have traditionally focused on nuclear, biological and chemical weapons, leaving conventional arms to proliferate unabatedly. Existing controls over the trade in conventional arms are inadequate and most often ineffective. UN Security Council embargoes, for example, are few and far between, whilst regional instruments, such as the EU Common Position on Arms Exports, vary in scope and often prove incompatible. Regional instruments are also incomprehensive – around 40 states remain outside international regulation – leaving gaps in the international regulatory structure for unscrupulous traders to exploit. According to the UK Ambassador for Multilateral Arms Control andDisarmament, ‘the status quo of a multiplicity of national and regional arrangements for the arms trade is not fit for purpose in an interconnected globalised economy’. This means that under current international law, states may export arms without properly assessing the likelihood that the transfer would destabilise regional security, obstruct development or be used to commit gross violations of human rights.
Recent developments in the conventional arms trade have magnified the consequences of under-regulation. Since 2002, the volume of international arms transfers has risen steadily in response to heightened threat perceptions following the 9/11 terrorist attacks. The ‘peace dividend’ that accompanied the ending of the cold war has been spent. Although it is not possible to place a precise figure on the financial value of the arms trade, for 2007, the last year for which sufficient data is available, it was estimated to be 51bn USD.7 These developments were accompanied by a growing recognition of the human cost of irresponsible transfers of conventional arms, and of small arms and light weapons in particular, and the need to subject the trade to stringent controls. It was in this context that the ATT process developed.

The idea of an ATT has a fifteen-year history in which the number of supporting states has risen from a handful to an overwhelming majority. In October 1995, Dr. Oscar Arias led a group of fellow Nobel Peace Prize Laureates in announcing their support for the international regulation of the trade in conventional arms. Non-governmental organisations and other civil society groups have been at the centre of the process ever since. Of the many advocacy initiatives undertaken in support of an ATT, the ‘Million Faces Petition’ of the Control Arms campaign drew the greatest international attention. The Petition, which comprised individual portraits as expressions of support, was formally submitted to UN Secretary-General Kofi Annan in June 2006.
Within the UN system, the process began with General Assembly Resolution 61/89 of December 2006. Subsequent Resolutions, findings by a Group of Governmental Experts (GGE) and discussions in Open-Ended Working Group (OEWG) sessions propelled the process to where it is today.The United Kingdom has been the leading advocate of an ATT, both at the governmental level and through the aforementioned activities of civil society. The UK is a co-author and co-sponsor of all three ATT General Assembly Resolutions and was the first government to come out in support of the Treaty.
Resolution 61/89 (2007) requested the Secretary-General to seek the views of Member States towards an ATT. The majority of states that submitted reports deemed an ATT to be both feasible and desirable, laying the foundation for more concrete steps to be taken. However, the GGE and OEWG highlighted areas of contention as well as those of general agreement. Many states remain divided over the contents of the Treaty, and, in particular, over the scope of weapons and activities it should regulate and the transfer criteria it should specify. More sceptical states continue to emphasise their inherent rights to procure and export arms under international law and the sufficiency of existing regulatory instruments.
Two developments made 2009 a crucial year. First, the United States departed from its earlier position of voting against the ATT; the Obama administration is now supporting the process. Second, spurred on by the reversal of U.S. policy, the General Assembly decided to convene a United Nations Conference on the Arms Trade Treaty in 2012. A Preparatory Committee, composed of all UN Member States, will meet between now and then to lay the groundwork.
Last month, the United Nations Institute for Disarmament Research (UNIDIR) held the Concluding Seminar of a project it has been implementing for the European Union: ‘Promoting Discussion on an Arms Trade Treaty’.11 The project organised a series of regional seminars, from Amman to Kuala Lumpur to Vienna, with the aim of promoting discussion and an exchange of views among states, international organisations, civil society and industry. On the one hand, a high level of support was expressed for concluding a strong and robust ATT among seminar participants in every world region.
In addition to drawing attention to the consequences of irresponsible arms transfers, many participants stressed the inadequacy of regional instruments and the limited effectiveness of those that are not legally binding. It was also widely recognised that for an ATT to be effective, it would need to be sufficiently flexible to take account of regional specificities and to be supported through the provision of financial and technical assistance. On the other, discussions of the categories of weapons and types of transfer to become subject to international regulation echoed differences in opinion that had emerged earlier in the ATT process. A number of states remained sceptical about the need for a Treaty at all.
The persistence of disagreement and scepticism is particularly worrying for the majority of states and vibrant network of civil society activists who have been working towards an ATT. That the United States agreed to support an ATT on the condition that it is negotiated ‘on the basis of consensus’ means these worries are well-founded.12 However, much remains to be discussed between now and the commencement of Treaty negotiations in 2012, including whether ‘consensus’ really means consensus.13 Current problems are unlikely to prove fatal to the ATT process. The speed at which momentum has accumulated behind the process and the obstacles it has so far surmounted are testament to the commitment of states, civil society and the international community to successfully concluding an Arms Trade Treaty.
Posted by kuldeep singh chauhan at 02:46