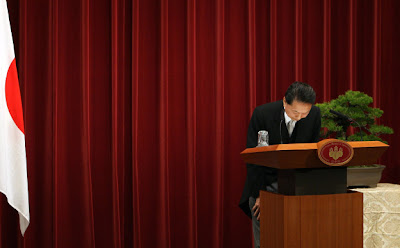 Why Tokyo could use a little more creative destruction.

In the end, Prime Minister Yukio Hatoyama took Kan's approach, saying, "[The past government] was biased toward the supply side, and we intend firmly to generate demand." His government set goals of 2 percent GDP growth per year for the next decade and the creation of 4.76 million new jobs in fields like elderly care, health, the environment, tourism, and exports. The problem is that his "growth strategy" includes neither growth nor strategy. It lists targets but offers no means to achieve them.

Moreover, the goals themselves are off base. Hatoyama set a target of 2 percent per year GDP growth, starting from a 2009 baseline. But from 2007 through early-2009, the recession slashed GDP by a remarkable 9 percent. If the Japanese government based its goal from the pre-recession GDP levels -- as it should have -- its GDP target for 2020 works out to just 1 percent growth per year, a truly dismal rate. The targets on the jobs side are equally off. Over the next decade, the country's working-age population will plunge by 7.6 million people, or 10 percent, and the number of retirees will rise by 6.5 million. How can the Hatoyama administration promise 4.8 million additional jobs when Japan won't have the workers to fill them? No one expects a rush of immigrants or women into the workforce to counter this trend.

For Japan to revive, it has to move beyond Kan and Takenaka's false supply-side, demand-side dichotomy. As famed economist Alfred Marshall pointed out more than a century ago, scissors need two blades: supply and demand. Japan has trouble growing because both blades are so banged up that neither cuts very well. Plus, each blade's dullness worsens the other.

For 30 years, Japan has been afflicted with a chronic shortfall of demand, a kind of economic anorexia. Consumer spending is too low, mostly because household income is too low. Over the last decade, real wages per worker have fallen every year but one. The only reason consumption has risen is that households have slashed their once-legendary savings rates: from 17 percent in 1980, to 10 percent in 1997, to 2.3 percent in 2008. If people earned more, they'd spend more.

To make up this shortfall, decades of Liberal Democratic Party (LDP) governments used artificial stimulants: mammoth budget deficits, rising trade surpluses, and monetary steroids to gin up often-wasteful business and infrastructure investment. The unsustainability of this strategy came home to roost in the recent recession, when a collapse of exports and accompanying investment sent GDP southward. This collapse abruptly erased 70 percent of the recovery eked out since late 2001.

With the economy now operating 7 percent below capacity and economists worried about a relapse in 2010, the newly elected Democratic Party of Japan (DPJ) turned immediately to measures to increase demand. It proposed a good initial remedy: boosting household disposable income, partly by measures making it cheaper to have children. Instead of building more of the LDP's notorious "bridges to nowhere," the DPJ proposed spending around 21 trillion yen, 4 percent of GDP, on measures such as an annual rebate of $3,250 per child, reimbursement for high-school expenses (which even at public schools can amount to $5,000 per year), free child-age medical care, and tax cuts.

Unfortunately, the DPJ evaded the issue of financing its largesse. Its talk of cutting wasteful spending to come up with the funds proved hollow. As a result, the DPJ has already cut back or postponed some of these measures. Moreover, the DPJ has not offered a remedy for the structural defects in private labor and capital markets that produce such low household income in the first place.

The DPJ's difficulty in financing its programs brings up the supply side of the scissors. Japan will never find the resources to boost household income, support the elderly, and address its gigantic government debt unless it accelerates per capita GDP growth, hikes the tax base, and increases returns to investment.

With the number of workers declining, the only way to boost GDP is for each worker to produce more. At the moment, unfortunately, long-run productivity is growing only 1.5 or 2 percent per year. If the labor force declines 1 percent a year and productivity rises 1.5 to 2 percent, the math makes it clear: over the long haul, GDP can only grow a meager 0.5 to 1 percent, maximum -- which is just about what the Bank of Japan, the OECD, and other authorities estimate will occur after a few years of higher growth as the economy recovers.

Thus, Japan cannot achieve healthy long-term growth without a productivity revolution. Unfortunately, neither the DPJ nor the LDP has seriously addressed this need. There is lots of talk about more research and development spending and economic exotica like nanotechnology. But Tokyo should take a look at the United States' recent productivity revolution, where real improvements lay in old-line sectors such as retail and rust-belt manufacturing. Under the pressure of stiff competition, companies in these industries adopted new technologies and more efficient ways of doing business. Aside from a few world-beating sectors, like the automotive industry, Japan is so far behind world benchmarks of efficiency that it could enjoy a huge leap in growth just by catching up. Even in manufacturing, Japan is 30 percent below U.S. productivity levels.

The key is what economist Joseph Schumpeter called "creative destruction," or, as a South Korean minister once put it, "You can't have competitiveness without competition." In a healthy economy, jobs come and go. Companies come and go as newer, better ones beat them. At the same time, a healthy social safety net aids workers in their transition from firm to firm and job to job. Competition, plus a government-financed safety net, is the combination that best produces growth, high employment, rising wages, and income security, as Sweden and Denmark demonstrate.

Japan has neither condition. It preserves incumbent firms and jobs by stifling competition, meaning it has one of the lowest rates of labor mobility and company turnover among rich countries, and correspondingly low potential growth. The LDP claims as one of its alleged supply-side reforms to have aided labor flexibility by increasing the use of part-time and temporary workers, who now represent one-third of the labor force. In reality, by paying these "irregular" workers meager incomes, businesses have lowered real wages for everyone, thereby crippling consumer demand and creating an anti-reform political backlash. Rather than addressing the problem by providing safety nets and wage equality for "irregular" employees, the DPJ has promised to ban their use in some sectors, focusing on a futile effort to restore the old lifetime employment paradigm.

Some in the DPJ understand that genuine flexibility, better wages, and strong consumer demand are interdependent. But the party's political tacticians, especially Secretary-General Ichiro Ozawa, understandably do not want to alienate constituents in weak sectors or allies in the unions. Therefore, the DPJ has punted on the question of the economic fundamentals Japan needs to change.

Fortunately, there is a way out. These days, party loyalty and traditional political machines are weaker than ever. Voters are increasingly choosing on the basis of the economy. Hence, though it may seem in the short-term that there is a political need to placate assorted interest groups at the expense of economic growth, in the long-term that is the road to electoral defeat. That's what brought down the LDP in a landslide rejection in 2009. This new political equation will put pressure on the DPJ to come up with some genuine reforms.

Many in the DPJ already recognize this. Several members, for instance, have argued for allowing in cheaper food imports while giving income support rather than production subsidies to the dwindling ranks of aging farmers -- something that could have been political suicide in the LDP era. And younger Diet members -- many of whom came from the bureaucracy, business, or academia -- seem to understand that in the long run effective politics requires effective policies.

Hopefully, the new growth strategy announcement will prove nothing more than a disposable campaign pamphlet for this July's pivotal upper house elections. The DPJ needs to get a single-party majority in that chamber so it can rid itself of dependence on two small retrograde parties and focus on hashing out the tough economic issues. The things it had to say to win the lower house in 2009 and thinks it has to say to win this July are very different from what it needs to do in order to retain power. If it fails to revive Japan, it too will fall from power. More political realignments will ensue. Japan will have no political stability without prosperity, and no prosperity without serious reform.
Posted by kuldeep singh chauhan at 03:16