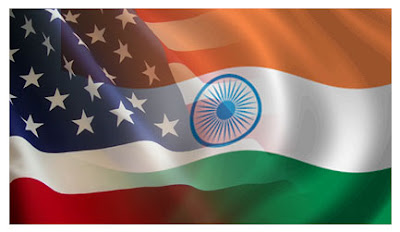 Sitting in the imposing Hall of Flags in the US Chamber of Commerce Building across from the White House, its ornate ceiling festooned with banners celebrating explorers such as Amerigo Vespucci and Hernando Cortez, one might wonder if the history of the world would have been different if a certain Christopher Columbus had a GPS in his backpack and got his coordinates right. Yeah right, the desi wiseacre might respond snarkily: A few of us would be sitting on Reservations drinking ourselves silly while the White Man would be wooing Natives American tribes half-way across the world.

Perhaps. But the scene of the action on Thursday was the elegant Benjamin Franklin Room a few blocks away at the US State Department, in the inscrutable-sounding Foggy Bottom. Here, amid historic artifacts such as the desk used by John Quincy Adams to draft the Declaration of Independence and portraits of the Founding Fathers, US President Barack Obama and his Secretary of State Hillary Clinton invoked superlatives from Mark Twain and Max Mueller to talk up ties with India. Why this happened at this point in time has more to do with incremental progress in relations between two countries than any sudden or spectacular policy decision.

Ever since Bill Clinton, a history buff with an intellectually astute spouse, decided in the late 1990s that Washington had to correct its policy of seeing India through the Cold War prism, ties have been on an upswing. George Bush’s uncomplicated approach of seeing things in black and white in the foggy war on terror accelerated it. Now, Barack Obama’s nuanced approach melds Clinton’s romanticism with Bush’s pragmatism and is cranking the relationship up a few notches. US officials say there is continuity in the approach, and it is the result of a combination of factors, not linked to any one country or geopolitical development.

Some of the reasons — or three million — were right there at the State Department. Two desk officers, a director of the South Asia bureau in Foggy Bottom, the pointman for South Asia at the National Security Council, two info-tech whiz kids manning White House communications, the Chief Financial Officer of Washington DC, and the USAID administrator, are of Indian origin. Overstatement is risky but that’s when one might start to wonder if there is more to the corny Bollywood line “Hamare aadmi chaaro oar phaile huwe hain” (Our people are everywhere). Mandarins on both sides caution that it’s not always a help to have American officers of Indian origin. If anything, this makes them more circumspect, even overcautious about anything to do with India.

Add to that Obama’s announcement the day of the US-India Strategic Dialogue that he was appointing MIT Dean of Engineering Subra Suresh as Director of the US National Science Foundation. He had already mentioned in his speech that he met the 2009 National Spelling Bee champion of Indian-origin at the White House the previous day. The day after Obama’s speech, another girl of Indian origin won the 2010 title. Then he rushed off on Friday to the Louisiana Gulf Coast to tackle the BP oil spill crisis even as state governor Bobby Jindal was giving him a torrid time and another gubernatorial aspirant (Nikki Haley Randhawa) was campaigning in South Carolina. Is there any place in the American mainstream that you don't run into people of Indian origin?

It is absurd to credit immigration or personnel alone with the blossoming of bilateral ties, but in American eyes, a US-India alliance is an idea whose time has come and it driven by democracy and demographics. In fact, it has more to do with 1.2 billion Indians in India and what they offer than the three million Indian-Americans in the US. Whether it is education, health, energy, agriculture or geo-strategic muscle, US officials say they cannot count India out because the country acquires more heft with every passing year. “Indispensable India,” is the current Washington DC expression.

If anything, it’s the Indians who are guarded, fearful that this is a temporary American fascination at the time of its decline. Despite the US turning it on, many Indians are underwhelmed. Absorbing the soaring rhetoric and woozy high that his brother, India’s education czar Kapil Sibal, is part of, former foreign secretary Kanwal Sibal is among those who counsel caution. While Hillary Clinton described US-India relations as “an affair of the heart, not just of the head,” Sibal and others maintain that New Delhi should not let the heart rule the head. Any perceived US support for India's bid for a permanent seat on the UN Security Council is now seen as a litmus test for Washington's India tilt. Sibal says it is just a “change of inflection”. Others point to the spotty cooperation on counter-terrorism (the shadow of access to David Headley hung over the Strategic Dialogue) and nagging issues such as Indian scientific entities remaining on the sanctions list.

But current officials are typically more upbeat than former officials and they say all of this is merely a “matter of detail” and the big policy shift occurred a long time ago. “Look at this,” one US official said, waving his hand across the festive atmosphere in the Benjamin Frankin Room as Obama glad-handled the ropeline, “With which other country do you think we can celebrate our common values here? China? This is the real stuff.” The only country that could “screw-up” this relationship, he said, was India. By the time Obama arrives in New Delhi in November, the world will know if India sidestepped the propensity to do so.
Posted by kuldeep singh chauhan at 01:13