Where China is investing 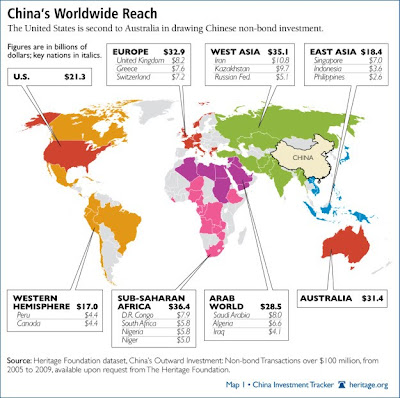 The Heritage Foundation has pulled together a fascinating study of Chinese investment -- showing (with really nice charts and maps!) just where all of those yuan are heading overseas.

A few things to note, plus one question....

Sub-Saharan Africa is the biggest single region for investment for the Chinese. (Plus, $36.4 billion is a lot of investment in a region whose total GDP is $744 billion.)

China spends the most money in Africa in the Democratic Republic of Congo. The resource-rich country is one of the very few on Earth whose economy has actually shrunk in the past 20 years (due to a brutal civil war).

For every dollar of U.S. investment, China spends 51 cents in Iran.

China invests nearly twice as much in west Asia as in east Asia -- a testament to its need for resources, more so than products.

China spends more in Australia than any other single country.

Why is China spending so much in Greece? Shipping?
Posted by kuldeep singh chauhan at 03:36