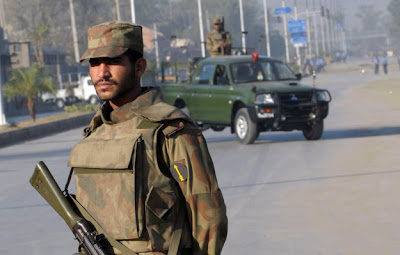 The capture of Mullah Baradar doesn't change the fact that, on many important security issues, the United States and Pakistan still don't see eye to eye.

The dramatic news of Mullah Abdul Ghani Baradar's capture has revived a long-dormant spirit of optimism regarding the U.S.-led effort in Afghanistan. Eager for a clear-cut victory after the country's slow-motion collapse during the past five years, many hoped that the arrest of Baradar, Taliban leader Mullah Omar's top deputy, would not only be a turning point for the NATO war effort in Afghanistan, but would also usher in a new era of cooperation with Pakistan's main spy agency, Inter-Services Intelligence (ISI).

In the New York Times' article on Baradar's capture, the paper referred to unnamed Americans who think Pakistani officials, most notably Gen. Ashfaq Kayani, "have gradually come around to the view that they can no longer support the Taliban in Afghanistan ... without endangering themselves." Baradar's arrest was evidence of a "sea change in Pakistani behavior," Bruce Riedel, a former CIA official, told the Times.

Not so fast. The circumstances surrounding Baradar's capture are still murky, making it difficult to extract any meaning from the Pakistani decision to arrest the Taliban leader. And even if U.S. and Pakistani interests overlapped in the case of Baradar, there are still a slew of outstanding issues between the two countries that appear no closer to resolution.

"The basic problem is that there are things we don't know about this operation, and that we will probably never know," says Teresita Schaffer, director of the South Asia Program at the Center for Strategic and International Studies. The most optimistic explanation is that the ISI thinks the Afghan Taliban has become a threat to its interests in Pakistan, and has decided to move against the group. But Schaffer also floated another, less cheerful, possibility: Baradar, as suggested by this Newsweek profile, is more open to negotiations with Afghan President Hamid Karzai's government than some of the Taliban hierarchy's hard-line members. The ISI could have arrested him in a bid to thwart negotiations meant to assimilate the Afghan Taliban back into Afghanistan's political fold, which would likely cost Pakistan its influence as the group's patron. In other words, given the information available to the public, the Pakistanis could have arrested Baradar with the hopes of halting Taliban attacks against NATO forces in Afghanistan -- or they could have arrested him in an attempt to continue those attacks.

Even assuming that Baradar's arrest is a step in the right direction, there remains a long list of issues on which the United States and the Pakistani military do not see eye to eye. The most obvious is the Haqqani network, which operates out of North Waziristan and has become one of the most lethal threats to NATO forces in Afghanistan. Although General Kayani has shown a willingness to go after Taliban operatives in South Waziristan, the Pakistani military has repeatedly rebuffed U.S. requests to take on Haqqani operatives to the north. For years, U.S. officials have accused the ISI of maintaining links to tribal patriarch Jalaluddin Haqqani. In one particularly blunt message delivered in 2008, CIA Deputy Director Stephen Kappes traveled to Islamabad to tell the Pakistanis, "[W]e know there's a connection ... and we think you could do more and we want you to do more about it," as summarized by a senior American official to the New York Times. U.S. Defense Secretary Robert Gates has also stated publicly that Pakistan's ties to the Haqqani network, as well as other extremist groups in the tribal areas, "are a real concern to us." The ISI is thought to maintain its ties to Haqqani because it perceives his organization as a valuable asset in countering Indian influence in Afghanistan.

Pakistan's fixation with India has also led the country to sponsor Lashkar-e-Taiba (LeT), a paramilitary group focused on forcing India out of Kashmir. The United States designated LeT as a terrorist organization in December 2001, in the aftermath of the September 11 attacks; under Western pressure, then Pakistani President Pervez Musharraf also banned the group in 2002. Nevertheless, LeT reconstituted itself as Jamaat-ud-Dawa and continued to plan and carry out attacks against Indian interests, culminating in the spectacular November 2008 attacks in Mumbai. The Mumbai massacre raised to a fever pitch Western and Indian calls for Pakistan to crack down on the organization. "Pakistan has restricted the aboveground organization, Jamaat-ud-Dawa, but not to a significant degree," notes Stephen Tankel, a visiting scholar at the Carnegie Endowment for International Peace and author of the forthcoming Storming the World Stage: The Story of Lashkar-e-Taiba. "They can operate under different names, and they continue to raise funds."

If anything, Lashkar-e-Taiba has only escalated its activities in the past year. The day after Feb. 12's announcement that Pakistan and India would hold talks for the first time since the Mumbai attacks, a bomb exploded outside a crowded cafe in the Indian city of Pune, killing nine people. Indian authorities immediately made it clear where their suspicions lay -- with Lashkar-e-Taiba. Home Minister Palaniappan Chidambaram responded by announcing renewed efforts to interview David Headley, a Pakistani-American held in the United States who is allegedly an LeT member. Whether or not LeT's leadership ordered the Pune attack, Tankel says, "the group has clearly been emboldened and is ramping up its transnational activities." That isn't exactly an encouraging sign that Pakistan is doing everything in its power to clamp down on the organization.

Pakistan has charged seven individuals for involvement in the planning of the Mumbai attacks, including LeT's operational commander and the plot's alleged mastermind, Zaki ur-Rehman Lakhvi. Although this is an important step, Western and Indian officials have been frustrated by the trial's slow pace -- and particularly disappointed by a Pakistani court's decision to free Hafiz Saeed, the head of Jamaat-ud-Dawa, who they accuse of being behind the attack. The court claimed that it lacked sufficient evidence to hold him. In addition to New Delhi's anger that Saeed is not facing trial, Tankel stated, "there is concern on the Indian side that there are other people who aren't being tried, who should be tried." He added that some in India have also alleged Pakistan is inflating the importance of several of the LeT functionaries who are on trial.

Pakistan also maintains extensive contacts with underground figures with connections to India, most notoriously the Mumbai-born crime boss Dawood Ibrahim, according to a January Congressional Research Service report. Ibrahim's organization, reportedly with the ISI's assistance, carried out a number of bombing attacks on March 12, 1993, that killed 257 people. Ibrahim subsequently relocated to Karachi, where under the ISI's protection, his organization has "developed links to Lashkar-e-Tayyiba" and "found common cause with al Qaeda and shares its smuggling routes with that terrorist group," the report says. Pakistan has ignored repeated requests from India to extradite Ibrahim -- most recently, on the suspicion that he played a role in the 2008 Mumbai attacks.

The lack of progress in resolving these outstanding issues should discourage the United States from expecting a volte-face from Pakistan. "You have to remember the [Pakistani] military is in some ways very cautious," Schaffer says. "It has gone through a period of looking very bad in front of their people, and they don't want to look bad again." Pakistan's fraught relationship with India is not going away anytime soon, and for that reason, the military is loath to sever ties with its longstanding clients. So, however much Baradar's arrest may cause U.S. commentators to dream of a revolution in Pakistani foreign policy, they will likely have to satisfy themselves with incremental progress.
Posted by kuldeep singh chauhan at 04:17