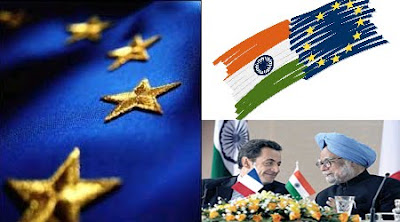 Just back from India after my first visit in seven years, I had two overwhelming impressions. One was the evidence, wherever I went, that the Indian economy has taken off in a big way and has developed unstoppable momentum.

Just back from India after my first visit in seven years, I had two overwhelming impressions. One was the evidence, wherever I went, that the Indian economy has taken off in a big way and has developed unstoppable momentum.

The other was the renewed realisation that – as former Indian President Abdul Kalam told the European Parliament last April – India and the EU have striking similarities as "multi-cultural, multi-linguistic and multi-religious entities", quite apart from their common commitment to democracy.

It has taken the rest of the world a long time to wake up to the high growth rate in India, which has been galloping along at 6 per cent per annum for the past two decades. One reason is undoubtedly that it has been over-shadowed by the Chinese performance of 9.5 per cent annual growth over the same period.

Another is that, despite the large increase in Indian GDP, the distributional effect has been minimal, and India's perennial problems of rural poverty and high unemployment do not seem to have been noticeably improved.

India is now beginning to be bracketed with China as a potential super-power, threatening the West as a competitor for cheap fuel and food supplies from the rest of the world, but its progress remains considerably slower than China's and so far at least shows few signs of narrowing the gap with its northern neighbour.

Daniel Gros, of the Centre for European Studies (CEPS), recently remarked that China's export structure, unlike India's, was already similar to that of the EU and the US, namely that it was the typical structure of an already developed country, rather than a developing one.

Professor Rajendra Jain, of the Centre for European Studies at Delhi's Jawaharlal Nehru University, put it more graphically when he said that China is "in the Olympic games league and India in the Commonwealth games league".

In the longer term, however, India has two important advantages which may help it to catch up. One is the almost universal fluency in English of its educated classes; the other is that it is an open society, with a vibrant civic sector and a free media. This should enable it to avoid the costly errors and miscalculations inevitably made by a 'command' economy, insulated from criticism.

For the last eight years annual summits between India and the EU have been held, with alternating venues. The most recent, held in New Delhi on 30 November, marked a step-change in the developing relationship.

Among several agreements reached, was one to speed up progress in negotiating a Free Trade Agreement between India and the EU, with the aim of settling all outstanding differences during the course of 2008.

This would enable India to gain unfettered access to a market of 450 prosperous consumers, gaining an important competitive advantage over some of its biggest rivals. Already, as Peter Mandelson pointed out, in a speech given in the margins of the New Delhi summit, Europe is already the first or second market for every one of India's top ten exports.

However, as a new study by the Carnegie Endowment for World Peace, India's Trade Policy Choices, shows, the gains to India of an FTA would be far smaller than the potential benefits of a successful Doha round. As with the EU, the greatest gain would come in the services sector, where – unlike in industry – India is already well ahead of China.

As K.S. Narayanan, a writer in The New Indian Express, recently noted, "Over the past decade India's exports of business services have grown at 25 per cent per annum, which is faster than any country in the world except Ireland". They have increased from around $5 billion in 1990 to nearly $74 billion in 2006.

Narayanan cites World Bank experts as predicting that India has more to gain than any other country in the world by bringing services on to centre stage in the Doha round talks. The potential for the EU is not much less.

Jose Manuel Barroso and Peter Mandelson please note. The closest co-ordination with India in the ongoing trade negotiations should bring great benefits to both parties. You are batting on the same side.

Dick Leonard is author of The Economist Guide to the European Union.
Posted by kuldeep singh chauhan at 02:37