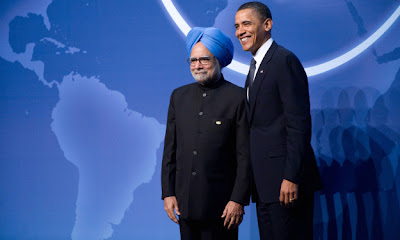 On the positive side of the ledger, President Obama can claim credit for intensifying U.S. outreach to Indonesia -- although formalization of a new Comprehensive Partnership remains unfulfilled given the postponement of the President's trip there to launch it. President Obama also deserves plaudits for committing the United States to exploring membership in the East Asia Summit, meeting with ASEAN heads of state, and fostering strong relations with key ally South Korea. Here again, however, the Korea-U.S. Free Trade Agreement, whose implementation should be a centerpiece of the relationship, remains stalled; President Obama seems unwilling to push Congress to ratify it. In another welcome trade-related move, the President has expressed his support for the Trans-Pacific Partnership. This is a worthy minilateral trade initiative, but it excludes Asia's big economies and is no substitute for a wider Asia-Pacific trade liberalization agenda. These are all early steps in the right direction, but they do not amount to strategic accomplishments.

On the negative side of the roster, there is no question that President Obama has been dealt a particularly difficult hand in relations with core Asian ally Japan -- where a veritable political revolution last August deposed America's staunch allies in the Liberal Democratic Party and brought to power a new and untested government. It has defined itself in office in part by opposing a previously agreed plan to realign American forces in Okinawa, leading to growing concern over the future of the alliance. The U.S. administration has struggled with how to handle this unresolved conflict -- which has been badly mismanaged by Prime Minister Hatoyama and his colleagues. Resolution may be in sight, but the whole affair risks tarnishing the alliance at a time when Chinese and North Korean assertiveness is intensifying.

Indeed, President Obama has been on the receiving end, until recently, of an increasingly sharp-elbowed China's projection of its power and influence in world affairs, which has created the rockiest period in Sino-American relations since the EP-3 incident of 2001. Here, a firmer and more balanced approach to China early on -- one that prioritized U.S. relations with allies in Asia a little more and reassured China a little less -- could have paid strategic dividends. But the administration's recent recalibration of its policy promises a sturdier defense of American interests and values and, by extension, a more stable relationship. It may even result in a Chinese decision to allow the renmimbi to appreciate. This would be an important accomplishment indeed -- one that China should take in its own interests, given its overheating economy. It would be welcomed by India, South Korea, Indonesia, Singapore, and other U.S. partners in Asia whose competitiveness has suffered from China's artificially cheap currency.


Setting aside the complex crisis in U.S.-Japan relations and the ups-and-downs of U.S.-China relations, it is U.S. relations with India that have perhaps taken the biggest hit over the past year. This is a shame: building a strategic partnership with the world's biggest democracy, Asia's other rising giant, has been a bipartisan endeavor since President Clinton visited the country in 2000 and launched a new era of cooperation. The transformation in Indo-U.S. relations subsequently overseen by President Bush and symbolized by the civilian-nuclear deal would not have been possible without the strong support of Congressional Democrats - including Indian-Americans' then-favorite Senator, Hillary Rodham Clinton. For their part, successive Indian prime ministers have worked hard to shed the baggage of Cold War non-alignment in favor of a growing partnership with the United States to help catalyze India's rise in the international system.

So why the sense of malaise in relations between the world's largest democracies? I would posit four factors. First, President Obama and his team don't approach India with an eye on its value as an Asian balancer in a region being reshaped by China's explosive rise. Second, President Obama's selective and narrowly defined realism doesn't allow much scope for values-based cooperation between the two countries -- or even for U.S. recognition of the intrinsic importance of India's success in a world where China's model of authoritarian development is on the march. Third, President Obama's emphasis on multilateral diplomacy (on climate change and a nuclear test ban, for instance) puts the two countries on opposite sides of complicated issues that push them apart -- unlike on many bilateral issues, like defense cooperation and counterterrorism, where their interests closely align, and on which the relationship previously hinged. Fourth, and most pointedly, the Obama administration has made a strategic decision to ally with Pakistan to wind down the war in Afghanistan. This has elevated Rawalpindi over New Delhi in U.S. policy. It has encouraged Pakistan to leverage its American friends to put pressure on India in ways that re-hyphenate Indo-Pak ties -- to the detriment of Indo-U.S. relations.

President Obama's Asia policy remains a work in progress with some real possibilities to advance key relationships. But losing India may do more to weaken the U.S. position in Asia than any number of accomplishments in relations with Japan, South Korea, and other partners. A few important Obama administration officials understand this, but so far they remain a minority.
Posted by kuldeep singh chauhan at 03:58