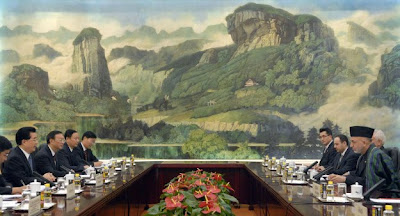 Cold economic realities dictate that China is going to be the big player in the new Afghan gold rush -- and Washington had better wake up to that fact, soon.

The prospect of cobalt in Kandahar has sparked lively debate about whether new mineral wealth -- if it pans out -- will aid or hinder U.S. policies in Afghanistan, as well as whether the country will fall prey to the so-called resource curse, as political scientist Michael Ross and others fear. But a short-term focus on Afghan-U.S. relations might be a mistake: The real winner from new natural-resource wealth beyond the Khyber Pass will be China. If the United States really cares about stabilizing Afghanistan's central government and eliminating terrorist havens, it needs to start working now to persuade Beijing that these are shared goals.

First, some background: Chinese foreign investment and aid has accelerated dramatically over the past decade, especially in Africa. In November 2009 alone, for example, China's largesse amounted to $10 billion in low-interest loans and $1 billion in commercial loans to the continent. With Beijing as cheerleader, trade has soared from $1 billion in 1992 to $106.8 billion in 2008.

In part this is due to China's willingness to do business with undemocratic, corrupt, and brutal regimes -- for example, in the Democratic Republic of the Congo (DRC), Sudan, and Zimbabwe. The DRC provides the best cautionary parallel to Afghanistan: The discovery in the late 1990s of copper, coltan, and other minerals in eastern Congo gave new life to a civil war that has now claimed upwards of 4 million lives. Flagging combatants were funded by mineral extraction, and much of those resources eventually flowed to China. The fact that violence is still simmering in eastern Congo -- and despite the costs that extraction imposes on the Congolese people -- has not been enough to deter Beijing from wooing Congo's government for access to the country's abundant resources.

So, if there's any thought that war in Afghanistan might dissuade Chinese investment there, it's best to dispense with that notion immediately.

China, which has a narrow land border with Afghanistan, already invests heavily in the war-torn Central Asian state. The state-owned China Metallurgical Group has a $3.5 billion copper mining venture in Logar province. Chinese companies ZTE and Huawei are building digital telephone switches, providing roughly 200,000 subscriber lines in Afghanistan. Even back in the war's early days in 2002 and 2003, when I worked in Afghanistan, the Chinese presence was acutely visible in Kabul, with Chinese laborers on many building sites and Chinese-run restaurants and guesthouses popping up all over the city. As Robert Kaplan has pointed out, these investments come with a gratuitous hidden subsidy from the United States -- which has defrayed the enormous costs of providing security amid war and looting.

With its massive wealth, appetite for risk, and willingness to underbid others on labor costs and human rights conditionality, China is the odds-on favorite for development of any new Afghan mineral resources. Chinese firms will control the flow of new funds, and the way those funds are distributed between the central and local governments. It's all well and good that Barack Obama's administration has recommitted to building civil projects in rural Afghanistan, but consider the relative scale of building a school to establishing a multimillion-dollar mine (not to mention the transport networks and infrastructure required to get the extracted minerals out) and it's easy to see what kind of influence the Chinese will bring to the table.

It is critical for Washington to start making the case to Chinese leaders that pure self-interest mandates they leverage this power wisely -- to promote stability, not catalyze new conflict, in Afghanistan. So far, China's investment in Logar has been in keeping with its "noninterventionist" foreign policy and was accompanied by development aid, but no overt political strings. Washington must require more from Beijing, however, to avoid upending all its hard-won gains.

The Obama administration has already asked China to contribute troops to the Afghan effort. This is a good first step, but a few hundred token soldiers will not make China a strategic partner in its Afghan campaign. It needs to persuade Beijing that the campaign is indeed China's campaign, too -- if not by touting democracy promotion and human rights, then surely economic benefit -- and that U.S. and Chinese strategies on Afghanistan converge.

This is not as hard as it sounds: As China-Africa expert Deborah Brautigam's careful work shows, China has on some occasions acted as a surprisingly responsible lender, for example using resource-backed infrastructure loans that force some gains to be reinvested in development. Although many have warned of a new Sino-colonialism, Brautigam's work suggests that perhaps China's awareness of its gargantuan and growing need for foreign export markets will make it a better "colonial" power than any European country ever was.

For China as much as the United States, the goal of a stable, central Afghan government that provides no haven for terrorists is a desirable goal. China has worried in the past about whether Afghanistan might provide a refuge for Uighur separatists. Leaving aside the ethics and wisdom of Chinese policies in the Uighur community's home region of Xinjiang, it's safe to say that Washington and Beijing share a common goal in preventing terrorism. Both countries would benefit from a stabilized government in Kabul that is able to command the loyalty and respect of provincial governments and populations. That, however, requires that Hamid Karzai's government deal with its endemic corruption problem. And though no one expects Afghanistan to turn into Norway, perhaps it can be nudged away from the DRC path and toward the model of a Saudi Arabia or a Kazakhstan.

When it comes to corruption, however, state-run Chinese firms have not seemed troubled by greasing the wheels of power brokers in Sudan, Zimbabwe, or elsewhere. Getting Beijing to understand the rot this breeds seems a hard sell for the Obama administration. If that fails, however, Chinese ears might perk up somewhat at the mention of how integral a stable central government in Kabul is to the security of Pakistan, a close ally of Beijing.

Stability in Pakistan should be an important goal for China. It is by now clear that the Taliban's campaign west of the Durand Line is inextricable from the destabilizing efforts of Islamist militants in Pakistan. If China does not want another nuclear basket case on its border, then it should care deeply about instability in Afghanistan. Currently, however, Beijing is still freeloading, relying on Washington to provide security for its limited interests. Perhaps the tantalizing prospect of $1 trillion in minerals might be enough to change the strategic equation.

Working together, China and the United States have a better chance of guiding Afghanistan to a happy outcome for all than will Washington on its own. To be sure, this is no easy task: There's plenty of evidence that aid conditionality by Western governments has not done as much good as hoped. But cold economic realities dictate that Chinese firms are likely going to be the big players in this new gold rush, and Washington had better wake up to the fact that it has a short window in which to convince Beijing to collaborate in making Kabul a better place.

--- Aziz Huq is an assistant professor of law at the University of Chicago. In 2002 and 2003, he worked in Afghanistan as an analyst for the International Crisis Group (ICG) and has since worked in Sri Lanka, Pakistan, and Nepal for ICG.
Posted by kuldeep singh chauhan at 03:30